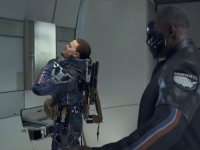 We knew it was all coming and here we are in the midst of TGS with all the new gameplay for Death Stranding. Like a whole new forty-eight minutes of gameplay for us all to take in on top of what Kojima Productions had for us last month. Sadly, given the location and developer, all of this new footage for Death Stranding is all in Japanese so if you do not speak the language it may be hard to understand. That is why we are back here to try to give you all of the details that we can figure out too.

As you will see, there will be a lot more of the walking and delivering we have seen in Death Stranding already. Norman will have an exoskeleton of sorts to make sure he can haul everything on his back as needed. He will also have the floating cart we have seen many times already. Something he can also use as a scooter of sorts to keep a bit more mobile. Given that there will be some MGS feeling combat in Death Stranding from the looks of it, we will definitely need this. I guess that is why we also have the leftovers of other players in the world to help us get around even if we will not be seeing them live.

Outside of those little tidbits, Death Stranding still looks like a delivery sim with two different worlds being in the mix of sorts. Have a look at the nice and long footage we have here. As of this writing, there is not a full English translation to go on. Hopefully, you are able to gather what I mentioned here as well as a bit more. There is close to an hour of clipped gameplay so there is a lot going on in the full game it would be safe to assume.

Hideo Kojima showcases over 48 minutes of brand new gameplay, including stealth gameplay and singing in a hot spring, from the wildly anticipated Death Stranding, coming to PS4 later this year.

Are you still fully hyped up for Death Stranding or does this do little to explain to you what is going on? Were you expecting to be able to run into other players given the descriptions or did you figure that each would only leave behind elements for everyone? Do you agree that the combat looks and feels a lot like the other games Kojima has given us recently? Let us all know down in the comments and then feel free to discuss. As we find more for Death Stranding, we will add it all to the site. I hope we are able to get more solid information before November.