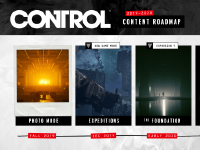 We are back again to look at the roadmap for the post-launch content still to come for Control. The big difference this time being that Remedy has given up some new details as to what to expect and when to expect them. Not just in terms of expansion for the story but also the other free updates coming to Control. Things like Photo Mode and New Game + that have apparently been something that gamers have been begging for since launch. I can see that offering up some fun little extras and reasons to dive back into the game again, but it is the expansions that should catch eyes here.

The first one being The Foundation, which will dive into more of the history of The Oldest House and other lore in Control. It would seem like this should have been something in the core game, but given that it will add extra run time it will be a welcome addition. More so when the second one looks to be the more interesting as it could link Control over to other games from the developer. Like Alan Wake for instance. Not only does the imagery throw out links, but the name (Alternate World Events) also lends to it. What other big events in the universe would fit perfectly in given how things have gone? Of course, that is just speculation but it seems like a solid candidate for things to come. Have you been waiting for Control to get more modes as we are now and for free? Will you want to replay the whole game with everything from the start or was one and done the way you wanted to go? Do you think that we will see Alan Wake or Quantum Break mixed in now or is that just wishful thinking? Let us have those thoughts and feelings down below and then feel free to discuss. As things get better defined for Control, we will update everyone here. All you need to do is keep coming back and maybe take a look at our review of the game. Until then, let the speculation fly.