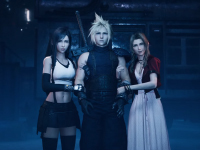 Here we go with some new gameplay for Final Fantasy VII Remake right out of TGS this year. Even though that event does not kick off until tomorrow, we have a fresh thing to look at from Square Enix to further show what we can expect on March 3rd of next year. Even if it is only part of the overall experience, it looks like there is a lot going on. Not just in terms of what we know from Final Fantasy VII already, but other bits getting added in too. Just as it should be here to make the PS4 purchase that much more justified. We all know that was why we all bought the console so long ago with the hopes…

Moving right along, here we have a nice clip of gameplay that shows off many of the characters we will get to play as and in turn fight in Final Fantasy VII Remake. Nothing new in the names, but we get to see a lot more of Tifa and Aerith in action here along with some of the mini-games we can expect. All the fun stuff and our first look at some of the Summons we are going to get come back from the original Final Fantasy VII here in the Remake. Ifrit and Shiva for those that have not just jumped down to the video and started watching as of yet. Sometimes I do not know why we keep writing when that is what you want.

Today Square Enix revealed a brand-new Final Fantasy VII Remake trailer, showcasing new gameplay and a deeper look at the slums of Midgar, where the oppressive Shinra Electric Power Company is embroiled in a fierce conflict with Avalanche, a resistance group fighting for the life of the planet. Players will get a first look at fan-favorite Shinra operatives, The Turks, along with a variety of mini-games and two powerful summons, Shiva and Ifrit.

Coming to the PlayStation 4 computer entertainment system on March 3, 2020, Final Fantasy VII Remake is a reimagining of the iconic original game that re-defined the RPG genre, diving deeper into the world and its characters than ever before. The first game in the project will be set in the eclectic city of Midgar and presents a fully standalone gaming experience that provides a great starting point to the series. Along with unforgettable characters and a powerful story, Final Fantasy VII Remake features a hybrid battle system that merges real-time action with strategic, command-based combat.

Did this new gameplay for Final Fantasy VII Remake get you all further excited for the release or do you need more to fully get behind it all at this point? Were you able to gather all the information possible here or was there too much chaos to fully get it all? Do you think we are going to get all of the Summons back in or will some of the larger ones get trimmed from the final build? Let us all know down in the comments and then feel free to discuss. We are all over Final Fantasy VII Remake and will have much more as we get closer to launch. Be sure to keep checking back in here for all of that and much more.