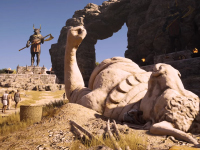 The wait is over for all of those looking to get a bit more education with their Assassin’s Creed Odyssey, as the Discovery Tour mode is out there now for the PS4, Xbox One, and PC. All of which as a nice FREE download for those who shelled out the cash for the game and made it possible for Ubisoft to keep pumping out the content. For those who did not but still want to take part in this new education mode for Assassin’s Creed, you can still pick it up as a standalone on the PC via uPlay. There are always so many options for all of this and it has been a fun tool to date.

More or less, this will function just as it did in the past Assassin’s Creed title but with some new additions to it all. That and it being set in Ancient Greece this time. All filled with its new locations and tours that any fan can get behind and explore. Even those that are not fans will be able to do so with a little training as it will still require some of the more basic controls to get around. It is all built on top of an Assassin’s Creed title, so that is kind of a given here. Have a look at what you can embark on as soon as you are done reading this and see if the education is going to be your thing.

Experience the world of Classical Greece like never before in Discovery Tour: Ancient Greece by Ubisoft. In this educational mode, explore the world as a living museum, travel to over 29 regions, and embark on 30 guided tours led by charismatic characters such as Leonidas, Herodotus, and more!

Now available for FREE to all Assassin’s Creed Odyssey owners and purchasable as a digital standalone version on Uplay PC.

Have you been waiting for this update to come to Assassin’s Creed Odyssey or is it so far out that you forgot it was going to be a thing? Are you excited to get to dive into more of the ancient Greek world or will you be skipping this for other things coming out this week? Do you still think this will be a good tool for educators to use in the long run to help reach more students? Let us all know down in the comments and then feel free to discuss. For more on anything Assassin’s Creed Odyssey or the franchise in general, be sure to keep checking back in here. We will keep all of the news and updates flowing out there.