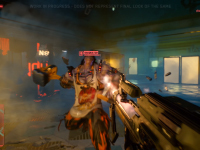 The wait is finally over and the world now has access to look at the latest gameplay for Cyberpunk 2077. All that behind closed door or needing to stand in hours long lines is no more as CD Projekt RED is offering it all up to us now after their latest stream. Well, at least part of it all as we head into a deeper dive on what Cyberpunk 2077 will actually house. At least as it all goes for the new 16-minutes of gameplay out there. Something that is a heavily edited and truncated version of the hour-long version seen at all of the conventions as of late. That still does not change the fact that we have more to see.

The first bit we have here is a quick and dirty look at two different ways we can approach the mission in Cyberpunk 2077. As mentioned before, once as a Solo and once as a Netrunner and all the various options those allow for. While both can go about things all stealthy, one is definitely set up for that more than the other. Especially when going at the Animals in the middle of this new location in Night City. Have a look and see part of what was missed out on from E3. You should not be let down too much I suspect.

Now that we have that out of the way, the team also took on a bit more for Cyberpunk 2077 and offered up some further explanations for the game. That is all handled in a longer Q&A form of the stream they held, which you can see below, but still more or less holds all the information that was shared by us and the various other outlets that covered it all. You can get the nice little recap just below too, but there is not much more in the way of details for Cyberpunk 2077 if you were hoping for that. Still a nice little watch and listen…

Watch the worldwide reveal of brand new game footage from Cyberpunk 2077, followed by a series of chats with members of the game’s development team hosted by CD Projekt RED’s very own Hollie Bennett!

Are you excited to finally get to see more for Cyberpunk 2077 or was it just too short for what you were expecting? Did you want to see the full demo everyone else was able to see like we did last year or is this enough to hold you over? Were you able to learn anything more for the game here or did you already fill up on this information already? Let us and the world know down in the comments and then feel free to discuss. For more on Cyberpunk 2077, be sure to keep yourself locked into the site here. We will keep it all flowing out to you as best that we can.