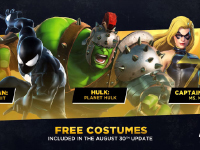 The first two characters coming to Marvel Ultimate Alliance 3: The Black Order as DLC are almost here and it looks as if there is a bit more coming with them. Those characters being Colossus and Cyclops for those who missed out on the announcement before from Team Ninja. All of which will be heading to the game on August 30th here. What we may not have known, since it came out during the D23 event, is that we are also going to be getting a few more character costumes to use in Ultimate Alliance 3 at the exact same time. All kinds of great things coming to the switch now.

Since I am sure you are curious, those costumes for Ultimate Alliance 3 will include the Planet Hulk version of Hulk, the Symbiote Suit for Spider-Man, and the Ms. Marvel version of Captain Marvel. All for the nice, low price of free when it all flows out there. You cannot really knock that at all. It is just another reason to keep playing Ultimate Alliance 3 as we wait to get any of the other character DLCs and story missions to keep it all growing. You can get the basic breakdown of it all just in the following video, even though it is kind of mixed in deeply here. Have a look and get ready for a short wait. Are you excited to get these new character in Ultimate Alliance 3 or would you have rather them been in since day one? Do you like these new skins we are getting or is it just a minor thing to keep us all going with the game? Which of the planned DLCs are you looking forward to in the future and will we see more of these freebies in as well? Let us all know down in the comments and then feel free to discuss. For more on Marvel Ultimate Alliance 3: The Black Order, keep checking in here. We will keep it all coming out to you as soon as we get it all.