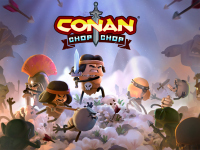 It looks as if the joke of Conan Chop Chop is going to be taking a bit longer to get out there. The game is still coming at us, but it was just let loose that Mighty Kingdom is going to need to take a bit more time to get it all done. That means that we will not be seeing Conan Chop Chop now until Q1 of 2020. Not that we had a solid date for the release before that, but that is the current state of it all. Just know that it will still be coming at us on the PS4, Xbox One, PC, and Switch still. Nothing new on that at all.

So, what is the cause of this delay for Conan Chop Chop? Well, it looks like the team wants to bring the game from being just a couch co-op title to having a full online multiplayer mode in it all. Not that we are losing anything from the core game that we have seen already, but that we will be getting a free online multiplayer part to it all. Something that Conan Chop Chop feels like it could also benefit from in the longer run. Even in this version of a roguelike title where all of the action and adventure is flowing quite heavily.

Publisher Funcom and developer Mighty Kingdom announced today that the release of Conan Chop Chop, the action-adventure roguelike that was teased on April 1st and revealed at E3 this year, will be moved to Q1 2020. Following a very successful first demo of the game to press this summer, the companies have decided to increase their investment in the project to deliver a bigger and better game. Among the features to be implemented in the upcoming action-adventure roguelike is online multiplayer.

“We had an absolute blast showcasing the game at E3 and Gamescom earlier this year. It was especially gratifying to see how much fun people had playing the game in co-op mode. The teamwork, the banter, the way people moved ever so sneakily towards their near-death companions in order to pick up their gold when they fall… We couldn’t have been happier with the reception,” says founder and CEO of Mighty Kingdom Philip Mayes.

“One of the things we get to do with the extra time is expand multiplayer from just couch co-op to also include full online multiplayer,“ says Mayes. “This has undoubtedly been THE most requested feature after we started showing off the game, so we’re very excited for the opportunity to bring that in.”

Conan Chop Chop is due to release in the first quarter of 2020 on PC, Xbox One, PlayStation 4, and Nintendo Switch.

Did you expect to be playing Conan Chop Chop before the end of the year here or does it make sense that it was going to be delayed as it has? Do you think that adding in the online multiplayer is going to be the best option or should it have stayed as a couch co-op by itself? Does it even matter to you as you are just looking to play the game in general? Let us all know down in the comments and then feel free to discuss. As we get more for Conan Chop Chop, we will update you on the site here. Be sure to keep checking back in for all of that and more.