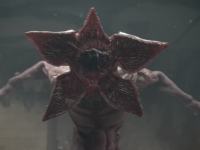 It almost felt like it was inevitable, but now Dead By Daylight is getting a full-on Stranger Things update this coming September. No, the whole game is not going to be changed over to a version of it all. That would be a massive undertaking for Behaviour. Instead, it is getting a new update that will add in some of the characters from the show as well as one of the more iconic monsters to stalk around Dead By Daylight with. That would be the Demogorgon if you have not figured it out by this point. It should seem fairly obvious here…

In addition to the monster, Dead By Daylight will also be getting Nancy and Steve from the show as playable characters in the game. Not the specific ones I would have hoped for, but still solid choices to add in here as we stalk around the new map of the Underground Complex known from the show. The one that is under the Hawkins National Laboratory for those still trying to figure it all out. Have a look at how this will all look for Dead By Daylight and then get ready to wait until September for it all to flow out there for the game. Fingers crossed that it is earlier and not later.

The Demogorgon, Nancy and Steve join the Dead By Daylight roster!

The Entity descends on the Midwestern town of Hawkins as Stranger Things, the critically acclaimed Netflix Original Series enters the realm of Dead By Daylight.

The Chapter introduces a new Killer and two new Survivors to the realm of The Entity: the monstrous, otherworldly Demogorgon is the new untamable Killer. Against it stands not one, but two, new Survivors: Nancy Wheeler, a tough aspiring journalist, and Steve Harrington, a former high school jock with a knack for finding trouble.

The Stranger Things Chapter comes with a new map, the Underground Complex. Located below the Hawkins National Laboratory, this grim compound caused an inter-dimensional rift that released dozens of creatures before being sealed off.

The Stranger Things Chapter launches in September on PC and consoles.

Did you figure it was only a matter of time before Dead By Daylight was given the Stranger Things makeover? Are you just as surprised by the selection of characters we are given here or does it all make sense to you for this DLC? Would you have rather seen the Mindflayer in some form or does the Demogorgon work the best here? Give us all of that feedback and more down in the comments and then feel free to discuss. The updates always seem to flow out there for Dead By Daylight and we will keep them coming for you here. Just be sure to keep coming back for all of that and much more.