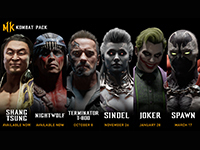 The wait is over, kind of, for those looking to see the full roster of the Mortal Kombat 11 Kombat Pack and who else would be joining the fight. That and those who were wondering on NetherRealm Studios' take on the iconic Spawn. We now have a new trailer to show off all of the characters in the pack and when we should expect them. This includes the rumored Terminator we thought with the last big update for Mortal Kombat 11. It also includes…The Joker…again… Yes, you read that correctly. We have that character back in as DLC yet again.

You can see the basics of all of the characters down in the following trailer for Mortal Kombat 11. The next one to join in will be the T-800 from the Terminator franchise. That will be in October, then to be followed up by Sindel in November. The Joker and Spawn to come months later and in 2020 at this point. This also puts a pin in that rumor that Ash Williams, from the Evil Dead franchise, will be in for Mortal Kombat 11. We can still hold out hope, but here we go for those who have picked up the pass for it all. Have a look now and see how they all look.

The Terminator T-800 from “Terminator: Dark Fate” is a cyborg assassin, sent back in time from a post-apocalyptic future. He is nearly indestructible and possesses superior technology, fighting skills and artificial intelligence capabilities making him the ultimate killing machine. The Terminator T-800 in Mortal Kombat 11 will feature the likeness of actor Arnold Schwarzenegger.

DC’s The Joker is one of the greatest Super-Villains of all time and a popular culture icon. Ruthless, incredibly dangerous and reveling in creating chaos, The Joker brings a deadly and unpredictable combat style to Mortal Kombat 11.

Were these the extra characters you were expecting for Mortal Kombat 11 or were you holding out hope that we would have other characters in the mix? Are you curious as to why we have The Joker yet again or did you suspect that would be the case? Could this be a build-up to a Kombat Pack 2 of sorts with the other rumored characters? Let us know what you are thinking down in the comments and then feel free to discuss. For more on Mortal Kombat 11, be sure to keep checking back in here. We will keep the updates flowing out to you as best as we can.