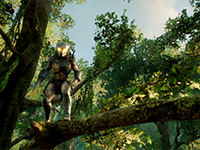 During the opening event for Gamescom, Predator: Hunting Grounds had some new gameplay drop out there to see the new take on the Predator IP

We have had a few months to take in the announcement for Predator: Hunting Grounds popping up out there and now we are back with a look at some actual gameplay for the game. Just about as I suspected when it did not show up at E3, I knew IllFonic would drop it during Gamescom. There is still so much time before we get this Predator title, that they could have waited a bit longer, but here we are with the first taste. All in a nice little pre-alpha build of the game and showing off what we might expect when it hits the PS4.

Sadly, it does not look like there is much more to it than seeing the four random humans running around and completing missions until the Predator drops in to take them out. There is not even a good breakdown of the weapons and abilities of any of the characters here. In fact, it looks like a normal squad-based shooter with just the Predator added in for fun. I am sure that there will be much more to it all as we get closer to launch, but I figured I would give the heads up for anyone thinking they were going to get a deep dive into the game here.

Hunt or Be Hunted

Predator: Hunting Grounds is an immersive asymmetrical shooter set in remote areas around the world, where the Predator stalks the most challenging prey. Play as a member of an elite Fireteam and complete paramilitary operations before the Predator finds you. Or, play as the Predator to hunt the most worthy prey, choosing from your vast array of deadly alien tech to collect your trophies, one by one.

How are you feeling about Predator: Hunting Grounds after seeing this little bit here? Do you agree that it looks a lot like a squad-based shooter more than a four versus one style of game? How do you think the other missions will work into it all here and how long will each side need to wait until the big showdown? Let us all know down in the comments and then feel free to discuss. When there is more for Predator: Hunting Grounds, we will obviously add it all to the site. Be sure to keep checking back in for that and much more as we find out more from Gamescom.