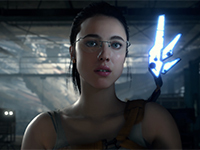 We may need to wait until the Tokyo Game Show next month to see all of the new footage for Death Stranding, but during the opening event for Gamescom we did get a nice big treat to a few things. Not too surprising given how Kojima Productions rolls and likes to troll their fans. Thankfully, though, we did get a nice new treat of characters and actual gameplay for Death Stranding to leave us all further confused and questioning things along the way toward November 8th here. That and it feels like more of the story is starting to show here for the game…maybe…

The first highlight was for a character we have been told about for Death Stranding, Mama, but now a deeper look at just what she is all about. Obviously, what is in a close to photorealistic capture and a character that is bound to a specific location. Bound in the terms of what looks like her dead baby being stuck in the location on the death side of things, but still attached to Mama for all of the nurturing aspects. The goings-on for Death Stranding are still really weird, but you can get a better idea just below.

Now that we have seen Mama a bit more, let us move on to Guillermo del Toro's character in Death Stranding. Well, at least the one he was captured for while being voiced by another. Here we have Deadman as he explains a bit more on the BBs, as they are called, and why they are in the tanks and carried around as we have seen so many times. Again, it all plays with the bridge between life and death as the BB is still alive but attached to a mother that is "dead." This all leads me to believe that Death Stranding is all about some world-ending situation where the land of living and dead can directly affect each other. Also, used to detect what I will call Death Lords even though they call them BTs in the game.

It would not be a well-rounded showing for Death Stranding if we did not have another call back to the friendship between Kojima and Keighly. Something that is hammered home and named dropped all the time at every show. Gamescom is no different as it now looks like the Game Awards host will have his likeness in the game along with other cameos as it is explained. You can see him in action just below. That and a new longer bit of gameplay for Death Stranding where we can see that we will need to urinate and shake a baby in the game. Both having good reasons besides being weird. Like growing plant life and resources or calming the BB back down after some traumatic event. Motion controls will be used for all of this as well. Have a nice long look as the operator tries and fails to see Mr. Reedus' junk…

Is there more sense coming to you now for Death Stranding or did this all just confuse you that much more? Do you think that this game will be more than a UPS simulator with all of the life and death imagery and story mixed in? Do you think it will work out well to add in the motion controls as it sounds like they are or will you try to play the game without? Let us all know down in the comments and then feel free to discuss away. When there is more for Death Stranding to take in, we will add it all here for you. Just be sure to keep checking back in for it all.