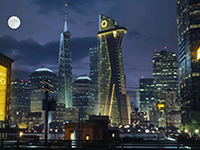 Just as we all figured, the extended gameplay for Marvel’s Avengers is now out there after Square Enix kept it behind so many closed doors leading up to Gamescom this year. It seems that this will be the state of how all of these games will be. A nice closed doors presentation for media and invited guests and then a public show to make sure fans of Crystal Dynamics can see what they missed. Marvel’s Avengers is not the only one doing that, but it is the one we are here to talk about today. Just to make sure we are properly excited for the game before May 15th of 2020 when we aim to get the game on the PS4, Xbox One, and PC.

The gameplay we have here is something that I have brought up quite a few times here on the site and on various other outlets asking about Marvel’s Avengers. It all starts out with the nice A-Day trailer to get things flowing and then shifts into the eighteen-minute tutorial demo to highlight each of the five core characters announced already. The interesting part is that it looks like some of the character models have been updated and maybe all captured on a more current build of the game. Even some of the fights feel like they play differently than I have seen in the past. This could be a bit of proof that they are listening to all of the fan concerns and are aiming to bring us all just what we are looking for.

Lightning strikes, repulsor blasts, ground pounds, shield throws, and spy tech make our heroes quite the team in Marvel’s Avengers. In this tutorial level, the Avengers must defend San Francisco after a mysterious attack threatens the safety of the city. How do you feel about Marvel’s Avengers now that you have had a chance to see some of the direct gameplay here? Did all of our past words and descriptions hold up for you or are you still on the fence about it all? Can you see some of the updated characters here or is it hard to compare to the shorter videos in the past to this one for you? Let us all know down in the comments and then feel free to discuss. I am sure we will have more for Marvel’s Avengers and when we do, we will have it all here for you to see. Just be sure to keep checking back in for all of that and much more. Especially out of Gamescom this year.