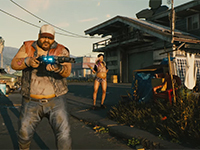 We are all still waiting for the big new gameplay for Cyberpunk 2077 out of Gamescom. It is coming, but that is not why we are back here today as we have been given a completely different update for the game from CD Projekt RED. Although, looking close at the new video here, there is a whole lot of that E3 gameplay some of the lucky ones had a chance to see. Maybe you can see it a bit too. The bigger announcement here for Cyberpunk 2077 is the fact that it is now heading to Stadia sometime around or after it launches on the PS4, Xbox One, and various other PC platforms.

This might not be the biggest news for Cyberpunk 2077 for all, but it is at least something. Thankfully, we have the new footage mixed in as the team goes deeper into all of the open world gameplay we know is coming. That and how hard it was to develop the game of this size and the undertaking it has been. You know, the usual stuff we get for these videos to keep us all interested and paying attention to Cyberpunk 2077 just a bit longer. As if any of us have stopped paying attention to it all at this point. Have a look to keep you all excited for the bigger gameplay that is in the pipes right now.

Cyberpunk 2077 will release April 16th, 2020, for PC, Xbox One, and PlayStation 4. The Google Stadia version will launch the same year — additional details will be made available at a later date.

How are you feeling about Cyberpunk 2077 coming to Stadia and will that be the format you are going to go with? Are you at all surprised that it is coming to the platform or will pretty much any PC game be coming to it? Did you spot all of the new footage mixed in to get you properly excited for the bigger reveal later on? Let us all know down in the comments and then feel free to discuss. Obviously, we will keep all of the news and updates for Cyberpunk 2077 coming at you as fast as we can. Be sure to keep checking in on the site for all of that and much more.