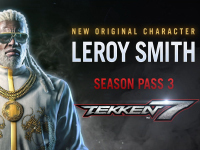 Here we go with more characters on the way to Tekken 7, as we now have the announcement of the third season of DLC here fresh from EVO. I honestly do not remember the second season flowing out there from Bandai Namco, but here we are today. It is good news for anyone out there looking to have more for Tekken 7, obviously, but it is also some good news for those looking for something completely new for the franchise. That would be a whole new character coming to the title and not just a reused or guest character as we have had over its run so far.

The first two characters we have here for Tekken 7 are Zafina and Leroy. One of those names should sound familiar as Zafina showed up in the last title we had out there as well as a few spin-off titles. This obviously leaves Levory as the new character mentioned above for Tekken. Someone who actually looks a lot like a character from The Walking Dead universe for us to use to try to recreate some fights from that. Have a look at the basics we have and a nice show from EVO this year. Then get ready to wait for it all to drop on us. Tekken 7 Season Pass 3 is happening! Zafina, the spiritual warrior, will return in September along with a new original character, Leroy Smith who will debut winter 2019.

We're also bringing a major update with new moves for ALL characters in Tekken 7.

Will you be diving into all of the fun of this new Tekken 7 DLC or have you moved on by now? Do you think we should have had this new character out there in one of the earlier updates or does it make sense that we are getting it now? How about the inclusion of Zafina here? Let us all know what is on your mind down in the comments and then feel free to discuss. When we have more for Tekken 7, we will obviously have it all here for you. All you need to do is keep clicking in on the links and watching what we have.