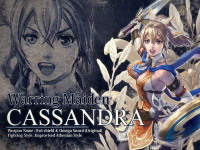 The sixth DLC character for Soulcalibur VI is here today as we have Cassandra joining back into the fight here. Some of you may remember this character from titles in the past, but now we have her in a new form from Bandai Namco just for this game. Not only that, but as you are reading this you can add her to your roster in Soulcalibur VI, as she drops today for the PS4, Xbox One, and PC versions of the game via the first season pass. I do hope you picked that bad boy up so you are not missing out on it at all. Although, you can still go a la carte if you still wish…

Fans of the Soulcalibur franchise will know her from all of the other titles that have come out in the franchise, sans the first, and that she is the younger sister of Sophitia. I mean, that should at least be a given from the look and the last name. Maybe not so much when it comes to the actual combat here as I do not remember the other using butt-slams as much, but Soulcalibur is all about the male fantasy of things. Even with the strong female characters that they are trying to fit in. Even if it is a bit off for it all.

Cassandra, the Athenian warring maiden, will be returning to the Stage of History! Unlock this character, her weapons, and a new story mission when she joins the Season Pass on August 5, 2019!

In addition to Cassandra getting the DLC for Soulcalibur VI, we also have a nice little tease of things to come with the second season of DLC. At least if you pay close attention to it all as it does feel like a lot of flashes. That is until the end where it is shown that Haohmaru from Samurai Shodown will be joining the roster. Just another of the crossover characters to grace Soulcalibur VI with their appearance. We did have Geralt from The Witcher as a core character already. Now we can just cram in more IPs into this fight.

"The legend will never die… Prepare for new battles, a new system and an all-new Season Pass in Soulcalibur VI!

Are you ready for Cassandra to join in for Soulcalibur VI or did you have your heart set on another? Did you want to see her back or were you hoping for a completely new character to join in the fun and fights? How do you feel about yet another crossover character coming into the game? Let us all know down in the comments and then feel free to discuss. When and if we have more to share for Soulcalibur VI, it will be added to the site here. Just be sure to keep coming back and checking in for all of that and much, much more.