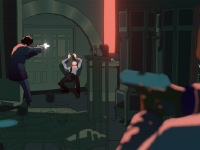 We all want more for John Wick Hex and now we have just that with a new look behind the scenes of how Bithell Games is going to work in all of the fun Gun Fu moves we have grown to love. I mean, that is one of the staples from the franchise and it would be odd if it did not truly show up in the game. This is why it is good that Good Shepherd Entertainment has brought us all a new look at John Wick Hex and how there will be more than just flashy animations once we start shooting and moving in the game. We do not want to just play a move after all. We want to be the character and try to recreate scenes.

As it turns out, it looks like the team went directly to the source by contacting the stunt team for John Wick and having them show off some of the moves for capture. Also the mentality of the character that comes across so subtle in the films but makes a huge impact. Pun intended. You can see all of that below as well as a look at the replay system coming to John Wick Hex. Not in terms of replaying the missions and levels when complete, but having the animations play out in a film style showing off how awesome you just made it all look. It looks like it is going to be something any fan of the franchise is going to want.

Get a behind-the-scenes look at the work that went into capturing the unique movement and moves of the John Wick film film franchise and translating them into an interactive experience in John Wick Hex.

Created in close cooperation with the creative and stunt teams behind the films, John Wick Hex is fight-choreographed chess brought to life as a video game, capturing the series’ signature gun fu style while expanding its story universe. Players must choose every action and attack they make, while considering their immediate cost and consequences. Every move in John Wick Hex feels like a scene from the movies, and every fight contributes to your progress on the job and requires precise strategic thinking.

The game is in development for consoles and will be available for Windows PC and Mac exclusively via the Epic Games Store at launch.

John Wick Hex complements the style of the films with a unique graphic noir art design and features the world class voice talents of Ian McShane and Lance Reddick amongst its stellar cast, with other cast for the game to be revealed later. Did you expect anything less for John Wick Hex or are you surprised they went as deep as they did for this? Are all of these things you picked up in the films and will be happy to see in the game form? How about that replay system so you can have a better look at what you just pulled off in the game? Let us have all of those thoughts down in the comments and then feel free to discuss. When we have more to share for John Wick Hex, you know we will share it all here. All you need to do is keep checking in for any and all updates.