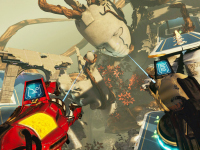 For all of those deep in the virtual worlds out there, we have Telefrag VR coming at us here next week. July 19th to be more specific as Anshar Studios has crafted this arena shooter together for us all to enjoy and work up another kind of sweat. The kind that comes from the fast motions around an arena we will need to take even if we are in the comforts of our own homes. Even is Telefrag VR is using dashes and the teleportation systems to fling around in the 1v1 matches that the games houses, there will be much more than a few thumb flicks going on. All of which I am fully ready to give a go when it hits the Vive, Rift, and PSVR. All the major platforms.

For those that may not be in on what Telefrag VR holds, we have some new gameplay to gaze upon to see just how hectic the matches can be in the game. It looks like it would work well with some of the larger scale setups for VR from room-scale to warehouse-scale too. That would be the dream. Thankfully, for the rest of us that cannot afford such setups, we can experience it all from our chairs or standing in our spaces. It may not be as fun as one could think when running wireless, but it works. I have gone off topic, though. Have a look at the new gameplay and get ready for some fast-paced VR matches soon.

Welcome to an alternative universe in which the Roman Empire never fell. Instead, it consolidated its power around the globe and continued to expand into outer space. The conquering of new civilizations and races and the development of new technologies ushered in a new era of gladiatorial battles.

The Games. This is what the Romans of the future call the insanely dynamic encounters that feature gladiators from all over the Empire fighting in abstract arenas with specially designed ceremonial weapons. These tools of destruction have been expertly designed not only to kill, but to inflict the maximum savage, barbaric carnage in order to delight the Roman spectators and their refined sensibilities.

Telefrag VR offers exciting PvP matches that require both a good knowledge of the arena and the creative use of dashes and teleports to gain the upper hand in combat. But there is far more to it than just defense and evasion. The game is called Telefrag VR for a reason.

Tired of shooting at an enemy that has just locked on to you as their target? Stay calm, teleport through them, and watch as your enemy is reduced to a pulp.

Shooting from distance? Gun down your opponents with a range of firearms, from the staples of the genre to new and unique creations. But if you’re going to try and outwit your foes, you’ll need to choose your loadouts carefully, as some may work better against the type of enemy you’re currently facing than others.

Telefrag VR features a full arena game mode where players face off in 1v1 battles. Ultimate victory is attained in a best-of-five format.

What are your thoughts on Telefrag VR as it all looks here and does it look like the VR Arena Shooter you have been waiting for? DO you think the dashing and teleporting will be too jarring in the game or will it run as smooth as the video here makes it all seem? How awesome would it be to get a full warehouse-scale version of this in the mix of your life? Let us all know down in the comments and then feel free to discuss. If we have more to share for Telefrag VR, we will share it all here. Just be sure to keep coming back in to see all of that soon.