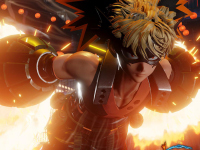 One more DLC character is coming to Jump Force and it is another fans of My Hero Academia will want to take note of. As it was shown off out at Anime Expo this year, Bandai Namco is bringing Katsuki Bakugo into the game via the Character Pass that is available for PS4, Xbox One, and PC owners of the game. I am sure that if you have been enjoying Jump Force to date, you already have this pass and will just need to wait until the character is downloaded and added in. Everyone else may want to start looking at the DLC pass if this is someone you want to fight as.

Weirdly, unlike the other characters shown off for Jump Force, Bakugo is not getting the full trailer and show of force we have come to know. You can read that as we have a quick flash for the character here to show you what they look like and maybe some of the moves brought along. It may make more sense to those familiar with the anime the character hails from, but for the rest of us playing Jump Force for fun, it may be a bit jarring. I am sure I am in the minority on this one. Have a look and see for yourself.

Earth's enemies are about to get schooled by another UA Student! Katsuki Bakugo is joining Jump Force as part of the Character Pass!

Are you glad to see another character from My Hero Academia join in on the fun of Jump Force? Is this the character you were hoping for or would you rather have a different one from the anime? Would you have also wanted a different character and a different anime/manga altogether? Let us all know down in the comments and then feel free to discuss. When we have more for Jump Force, we will share it all here. Just be sure to keep coming back for all of that and much, much more.