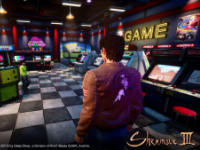 Even though there was a recent delay for Shenmue III, which does not mean that we will not be seeing more for the game before Deep Silver places it out there on August 27th. Given that there has not been a whole lot out there already for the game it does feel like Ys Net is holding back for some weird reason. More so when you have a look at the short video clip we have for Shenmue III and the few new screenshots that give us a basic idea for how the game is going to look. All of which with almost no context or idea as to what is going on besides the basics.

We get to see some of the combat of Shenmue III here, as well as some of the side tasks we will have to do. That is, unless the forklift driving and whack-a-mole games are part of the bigger plot in the game. It is quite possible, but the context here and what we have been given makes it all seem like it will be side adventures. Have a look for yourself at the new visuals for Shenmue III below and try to figure it all out for yourself as well. It would be nice to get some kind of context in the future so we can all stay at the correct excitement levels before launch. What are your thoughts on Shenmue III after seeing what we have here? Does it make more sense to you or is it all over the place and hard to figure out just what is going on by this alone? When will we finally get to see a solid gameplay breakdown or will it just be a surprise for when the game launches? Let us all know down in the comments. When we have more for Shenmue III to share, we will share it here. Stick around on the site to see and hear all of that.