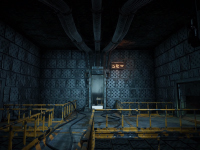 More of the areas in Remnant: From The Ashes are here for us to take in, as the world seems to expand even further for Remnant

We have another flyby attack for Remnant: From The Ashes in terms of more of the game's world to explore. I am sure you gathered that from the title there, but it is still the case for what Gunfire Games has been working on and what we should be expecting for the game. It would be a bit of a letdown if all we had was the last one and then had to wait until August 20th to finally see more for Remnant: From The Ashes. It would also just be poor marketing for the game. That is why there are better minds out there for this all than my own.

In any instance, we have one more flythrough of a few locations in Remnant in the way of Ward 13 and The Labyrinth. One being more or less a "home base" for us in the game and the other living up to the name that we would expect for it. Even if the Labyrinth does sound like it will house more cross-dimensional beings in it than a normal version from myth and history. Even if we would rather call it home than anywhere else in Remnant. Of course, we would not want to do that but it keeps things flowing until we are attacked by the Cyclops in the game. One of the new enemies we also get to see here.

Remnant: From The Ashes — Ward 13 & The Labyrinth

Remnant: From The Ashes, the third-person survival-action shooter where up to three allies can craft their ultimate survivor to combat dangerous foes across ever-changing hostile worlds, is offering a peek at the game’s hubs: Ward 13 and the mysterious Labyrinth.

At the onset of the Root invasion, wards were built to study the World Stones, which eventually led to travel between worlds. Ward 13 is as close to home as players have in Remnant: From The Ashes, keeping the Root out and those who would rebuild humanity safe. This base of operations will offer players upgrades, supplies, new gear and pieces of lore about a world long lost.

The Labyrinth is a boundless dimension and physical connection between planes of existence. Composed of floating islands connected by suspended pathways, the abyss may grant access to worlds temporarily severed from the World Stones. What other mysteries does this unknowable destination hide?

Players that want to jump into Remnant: From The Ashes early can pre-order the game now on Xbox One, PlayStation 4, Arc, and Steam for guaranteed VIP Preview Access ahead of the game’s launch on August 20.

Remnant: From The Ashes — The Cyclops

What do you think about the new locations we have to spy on here for Remnant? Do you like the new Labyrinth we will get to explore or will it be the same style of tropes we muddle through in every game out there? Does the Cyclops scare you a bit here or does it look like it will be something we will easily be able to manage in the game? Let us all know down in the comments and then feel free to discuss. Hopefully there will be much more for Remnant: From The Ashes. When there is, we will add it all here for you. Just be sure to keep swinging back in for all of those updates soon.