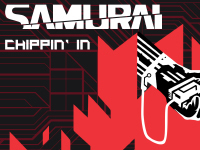 Most of the world is still waiting for some new gameplay for Cyberpunk 2077, but that does not mean that we cannot have a few nice things before that actually rolls out to the public. That is, we have a new update for the game from CD Projekt RED and while it may not be any of the actual game footage, it will be something highlighted in the game directly. We now have a nice sample of things that will show up on the Cyberpunk 2077 soundtrack due to the in-game band SAMURAI. For those keeping a close eye on how the game overlaps the tabletop version, which would be Johnny Silverhand’s band.

Yes, that would be the character that Keanu Reeves is playing in Cyberpunk 2077 and for those not familiar with the source, he is a battle-bard kind of character. It all makes sense that his band would still be out there in the game world even if he is only a "ghost" at this point. That is why the team has worked with the Swedish band Refused to nail down the sound they would have made. You can hear one of the tracks just below and see how it fits into the world of Cyberpunk 2077 that we have already been shown thus far. It is still to be heard if there will be any other bands that live on in the same way, though.

Cooperation with the acclaimed Swedish punk rock formation involves writing, recording, and producing an EP featuring the greatest hits of SAMURAI, with creative direction provided by CD Projekt RED’s composer team headed by Marcin Przybyłowicz. Tracks born from the partnership include ones both heavily inspired by the original source material, as well as original tracks created by the band exclusively for Cyberpunk 2077.

Gamers worldwide already got a taste of Refused’s work for CD Projekt RED’s upcoming open world, action adventure story, with SAMURAI’s Chippin’ In concluding the for the game. Today, to celebrate the announcement, SAMURAI’s iconic track has been made available across select digital stores and streaming services.

What are your thoughts on this new track for Cyberpunk 2077 and does it fit the setting of the game in your eyes? Do you think that there will be a plethora of other songs in the same vein or will the rest be done in-house by the developers? Are you curious as to why Mr. Reeves' real-world band did not drop this track instead? Let us have those thoughts down in the comments and then feel free to discuss. As we learn more for Cyberpunk 2077, you will learn more. As long as you keep checking back in on the site for all of that.