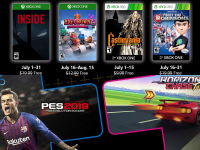 Update: We are making a swap to the PS Plus games lineup for July. This month, we are adding Detroit: Become Human Digital Deluxe Edition, which also includes Heavy Rain, to the July games lineup instead of Pro Evolution Soccer 2019. We apologize for any inconvenience.

Here’s more information about Detroit: Become Human, which will be available to PS Plus members along with Horizon Chase Turbo from July 2 to August 5.

A new month is almost on us here with July and that means new video games that we are going to get for free. Well, video games that you will get for free if you are part of the PlayStation Plus or Xbox Gold services. If you are then you may be in for a treat as the list of titles going live starting next month is here and we have it for you. Again, we get to expand our titles on the Xbox One and PS4 without needing to make any extra spends at our local stores.

I would like to say I cannot knock free video games, but they do feel a bit lacking for the month of July here. Most of the titles like Inside I already own or have played so it is kind of a waster to me. The other video games are some that I have absolutely no interest in general. I am looking at you Pro Evolution Soccer as I would rather go outside and actually play soccer and not sit behind a screen for it. That is just myself, though, and I am certain some of you out there will get some money's worth out of them. I was just hoping for more now that Summer has fully kicked off.

Here is the list of games we will all get for our PlayStation systems starting on July 2nd of 2019.

Here is the list of games we will all get for our Xbox systems starting on July 1st of 2019.