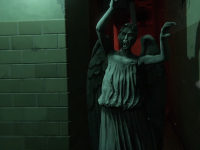 New videos for Doctor Who: The Edge Of Time are out there to show off how the game is made and how Doctor Who can get to experience it at SDCC

Not too long ago we were all made aware that Doctor Who: The Edge Of Time was going to be a thing and bring the franchise to the VR setting. It looked rather cool and I know I was hoping to be able to see and/or play what Maze Theory had put together at E3 this year. Sadly, that did not pan out and I was left wondering just what would be going on with this title. It launches this September on the PlayStation VR, Oculus Rift, HTC Vive, and Vive Cosmos so it would make sense to have some of us fans give it a go beforehand. Something that looks like it will be the case at SDCC this year for all of those Doctor Who fans that have always wanted to be a companion.

Yes, The Edge Of Time is going to be on the show floor over at the BBC Booth (#4129) to give us all a better feel for how the Weeping Angels and Daleks will haunt us further than our dreams. Something that works out for those on the floor, but for the rest of the Doctor Who fans that want a taste, we also have some new footage for the game and just how some of these things were made. That and a look at the new creatures made just for Doctor Who: The Edge Of Time in terms of the Hydrorks. Something that may make it onto the show at some point as they are all working in the same canon of the current season and Doctor. Have a look and get ready for a new VR adventure.

Doctor Who: The Edge Of Time — Developers’ Diary

Take a look at the making of Doctor Who: The Edge Of Time in the first developer diary from the team. Learn how the game aims to create an authentic experience true to the globally beloved show!

Make sure you stop by the BBC Booth #4129 next month during Comic-Con International, to be treated to a new Doctor Who VR Game Demo, created by PlayStack and Developer Maze Theory. The new VR game, Doctor Who: The Edge Of Time – will launch on PlayStation VR, Oculus Rift, HTC Vive, and Vive Cosmos in September, but you’ll get to play it first at the con.

Doctor Who: The Edge Of Time — The Hydrorks

Hydrorks are brand-new and unique to Doctor Who: The Edge Of Time. They are vicious amphibians, sometimes used as guards by races like the Stenza and Zygons. They are incredibly eerie, slimy and have a penchant for staring at you! These deadly carnivores have no table manners and possess a real taste for human flesh, with their hunger never being sated.

Doctor Who: The Edge Of Time — Making The Weeping Angels

A horrific nightmare fully realized in VR for the first time. A terrifying and powerful species of quantum-locked humanoids who are as old as the universe. They appear to be ‘weeping’ because they cover their eyes so as not to get frozen for eternity by other angels. Be warned, you think you know fast and frightening? Experience them in VR.

Doctor Who: The Edge Of Time — Making The Daleks

Incredibly imposing in VR, Daleks hail from the planet Skaro and their main leader — Davros — is an evil scientist of the Kaled race. They were once Kaleds but were badly mutated from nuclear war. Davros genetically modified them, integrating them with a tank-like robotic shell and removing every emotion apart from hate. AVOID AT ALL COSTS!

Are you excited to finally see more for Doctor Who: The Edge Of Time or do you not enjoy "behind the scenes" videos? Will you be out at SDCC and able to give it all a go there or will you be weeping at home waiting for everyone to tell you how it is? Is this the perfect franchise to take to VR or would you prefer it all to come in a different way? Let us all know down in the comments and then feel free to discuss. When we have more to tell you for Doctor Who: The Edge Of Time, we will add it to the site here. We will also be out at SDCC and covering everything there, so be sure to stick close to all of our social channels and site for those updates.