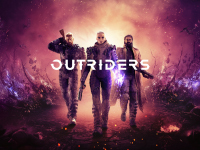 During E3, there were many odd looks in the crowd when many first saw and heard of Outriders. It felt like a surprise title that came out of nowhere and coming from People Can Fly whom has had a hit and miss history with their titles in the past. None the less, it looks like Square Enix is giving them the opportunity to give us another shooter with Outriders and we had our first taste of the game during the show. Well, the first concept behind it as all we had was the cinematic trailer you can see below. Given that they are aiming for a Summer of 2020 release, I am sure there will be much more to come.

If you missed out on the trailer we all had for Outriders, you can spy that just a bit lower here. Further down below that would be the most recent "developer diary" for the game where they try to dig in a bit more to give us a feel for what the game actually will be. A shooter that will allow up to three players drop in or out of the fight as they take on a bunch of horrible looking aliens or monsters. Seems a bit familiar, but at least we all know they can do the shooter rather well. I loved Bulletstorm even if I would have gone with a few different creative choices that a certain director wanted to go with.

Square Enix, creators of the iconic Final Fantasy and Tomb Raider franchises, today unveiled from the developers of Gears Of War: Judgement and Bulletstorm, People Can Fly, Outriders will release on Xbox One, the all-in-one games and entertainment system from Microsoft, PlayStation 4 Entertainment System, and PC in Summer 2020, marking a key release for the company. Square Enix External Studios, the minds behind Sleeping Dogs and Just Cause, delivers Outriders, a 1-3 player, drop-in-drop-out, co-op shooter, set in an original dark and desperate sci-fi universe.

“Outriders is the game that we have been wanting to make for years,” said Sebastian Wojciechowski, Studio Head of People Can Fly. “We’re very happy to be working with Square Enix on this project, it’s a big undertaking for us and the team has grown considerably to work on the Outriders project. We now have over 200 developers at four international studios working on this project to make it our most ambitious shooter to date. We’re very excited to finally unveil Outriders to the world, and we can’t wait to show you more of the game.”

“People Can Fly is the perfect partner for us to create a game like Outriders. They have a great history of creating high-quality shooters, plus an unmatched level of experience and expertise in the Unreal game engine, unrivaled in the gaming industry,” Said Lee Singleton, Co-Head of Studio at Square Enix External Studios.

“Outriders is a very exciting project for us at Square Enix External Studios. We’re focusing on giving players a true AAA co-op shooter with a deep feature set and strong narrative,” said Jon Brooke, Co-Head of Studio at Square Enix External Studios. “The team at People Can Fly really know how to make gunplay feel tight and powerful and we can’t wait to show you more later this winter.”

What are your thoughts on Outriders and were you just as puzzled during E3 as you are now? Does it shock you that they are going for another shooter game or did you have hopes that PCF would have gone for something a bit different? How do you think it will all function with us making our own character in the game or will it mostly be cosmetic to keep things flowing just the same? Let us all know down in the comments and then feel free to discuss. As more for Outriders gets out there, we will update you here. Just keep checking back in for all of that and more.