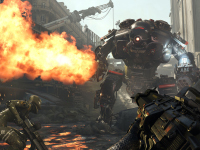 A bit more for Wolfenstein: Youngblood is here fresh from E3 to show off more of this Wolfenstein and the “Terror Twins” of the game

It is time to have even more explosions and action for Wolfenstein: Youngblood as we had a whole lot of new footage come out of E3 this year. Some of it during the big event that Bethesda put on and some of it out of the small showing Machine Games had for it on the show floor. No matter where you are with your updates for Wolfenstein: Youngblood, we have you covered here as we have the latest to show off for the game just before launch on July 26th on the PC, Switch, Xbox One, and PS4. Even if we were not able to get our hands on it during the show, we can at least enjoy all of the new visuals that are here now.

As I mentioned, there are a lot of explosions and all of the Nazi killing one would expect here in a Wolfenstein. There is also a bit more of a look at the “Terror Twins,” Jess and Soph Blazkowicz, and a bit more of their personalities we will get to enjoy as they head off to save their father. Spoiler alert, they have the same range that we have seen from B.J. in the newer Wolfenstein titles with all of the angst one would expect from them. Have a deeper look at them in action and get ready for all the Nazi killing you have been waiting for since the last game came out.

Rid Paris of its Nazi problem together with a friend in Wolfenstein: Youngblood, the first co-op game in the series's history. Set in a twisted 1980, step into the power armor of the “Terror Twins,” Jess and Soph Blazkowicz, on a mission to find your missing father BJ.

Clean up the Parisian streets with an arsenal of weapons and abilities in online co-op or with an AI companion. Wolfenstein: Youngblood is available July 26, 2019 for PC, PlayStation 4, Xbox One, and Nintendo Switch. Did you expect anything less for the twins here in Wolfenstein: Youngblood or did you want to see something different? Will they actually have a full range of emotion in the game or will they stick to the over-the-top angst we keep seeing here? Do you think they will actually get to find their dad out there or will that just be a lost cause along the way? Let us all know down in the comments and then feel free to discuss. We will have much more for Wolfenstein: Youngblood, as we move away from E3 toward its launch. Just keep your eyes here for all of that and much more.