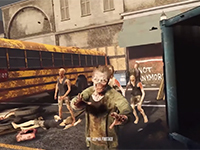 It is finally here thanks to E3, we have the first gameplay for The Walking Dead Onslaught. You know, the VR title that Survios announced a little bit before the event to get us all worked up and then held until an event out here. All set in the TV version of The Walking Dead universe and not the comics. The VR game that also aims to let us play as some of the iconic characters from the show in their own little stories. Even if you were not up to speed on it all, you should be now as we have only had that information before now. Now we have the first pre-alpha gameplay for the experience to take in and start the judging process.

Not too surprising, it looks like a standard melee and firearm experience in VR with the draping of The Walking Dead over it. It would have been a bit off to expect something different as it is a bit fitting for the franchise to go down that path. We also need to remember that this is all and an early look at it when it comes to the visuals and animation, but here we go with the first gameplay for The Walking Dead Onslaught. It looks like it will be stabbing and shooting with no worry about being bitten. An odd choice to go with given the source, but video games have to video game, I guess. How else would they do it unless they wanted to go down a permadeath path for the game loop?

Fight your fears head-on and step into the apocalyptic world of AMC’s global hit series “The Walking Dead” with the show’s official VR game, The Walking Dead Onslaught.

From AMC and Survios, the studio behind top-selling VR titles Raw Data and Creed: Rise To Glory, The Walking Dead Onslaught invites players to assume the roles of their favorite survivors from the TV series, struggling against the relentless walker threat while confronting both the horrors and humanity of this apocalyptic world. With an exclusive original story, visceral real-motion melee and ranged combat, player progression and a full campaign mode, AMC and Survios deliver the most immersive “The Walking Dead” experience yet.

What do you think about the gameplay for The Walking Dead Onslaught that we have here? Does it let you down for what you expected or is it too soon to judge in this state? Do you think it will be explained why we can be bitten in the game besides how it is treated in the rest of the franchise? Let us all know down in the comments and then feel free to discuss. As we find more to share for The Walking Dead Onslaught, we will share it all here. Just be sure to keep checking back in for it and more as we head forward.