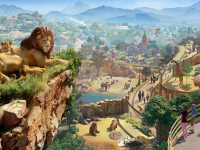 If you thought we were going to have to wait a long time until we had a chance to play Planet Zoo, you would be wrong. I was wrong too as it looks like we have a release date for when the game hit Steam on PC and it is November 5th. Not that bad of a turnaround for Frontier Developments as it seems not to long ago we were playing one of their other titles. This is not something I will scoff at, but enjoy as I am excited to see just how much detail in the animals Planet Zoo will have. I mean, outside of the trailers we have seen thus far with in-game footage. It always seems to feel different when in our hands.

In addition to the release date for Planet Zoo, we also have an update on what we can get for pre-ordering and the announced Deluxe edition of the game. For the elevated price, we will be getting access to the Beta that is coming, a soundtrack for the game, wallpapers to use on our systems and access to the Pygmy Hippopotamus, Thomson’s Gazelle, and Komodo Dragon. I am not sure how I feel about Planet Zoo having exclusive animals, but seeing as I will be getting this version, I do not think it matters too much for me. Everyone else out there that is questioning, it seems like it may affect. Have a look and see if you will be pre-ordering now.

We’re excited to announce that Planet Zoo will launch on 5 November 2019 and is now available to pre-order on Steam! Planet Zoo: Deluxe Edition includes the Planet Zoo game plus the following bonus digital content:

Planet Zoo presents the most authentic animals in videogame history. From playful lion cubs to mighty elephants, every animal in Planet Zoo is an individual who thinks, feels and explores the world you build around them. They care about their surroundings and each other, with complex environmental and social needs. Nurture your animals throughout their lives, study and manage every species to see them thrive, and help them raise young to pass their genes onto future generations.

Manage your own zoo in an expressive world that reacts to every choice you make. Focus on the big picture or go hands-on and look after the smallest details. Thrill visitors with prestigious animals and famous exhibits, develop your zoo and research new technologies, and release animals back into the wild to repopulate the planet.

Unleash your creativity with the next evolution of Planet Coaster’s best-in-class creation mechanics. Craft stunning scenery and habitats, dig lakes and rivers, raise hills and mountains, and carve tunnels and caves as you build your own zoo. See your animals and visitors respond to your creative vision, and share your designs with friends in Planet Zoo’s online community. Bring the world’s greatest designs home to your own zoo for your animals and visitors to enjoy.

Did you expect to see Planet Zoo launching so fast or does it seem like they have the design system locked down to keep turning these games out? Will you be going for the deluxe edition of the game to get the extra animals or will you miss out? Do you suspect that they will be out there as paid DLC at a later date or will they stay exclusive forever? Let us all know down in the comments what is on your mind. When we have more for Planet Zoo, you will be the first to know. At least for those that are coming back to check in on the site regularly.