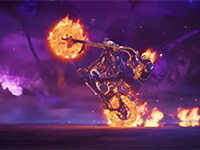 It looks like the roster for Marvel Ultimate Alliance 3: The Black Order is going to be ever expanding as we have a few more heroes to add in just before launch. We need to be able to have them all in there and Team Ninja is doing their damnedest to make that happen. That is why it is great to announce that we are getting Ghost Rider, Electra, Moon Knight, Beast, Elsa Bloodstone, and Nova in the mix of it all. Valkyrie may also be in the mix here for Ultimate Alliance 3 as she can be spotted in the latest trailer, but nothing concrete as of yet. I do hope we know before July 15th when the game hits the Switch. I am almost certain we will as the roster just keeps growing.

Speaking of, we also have word on a new Expansion Pass for Ultimate Alliance 3 that looks to add even more characters to the list along with new story, modes, and more characters. So far, it looks like they are focusing in on the characters as it looks like the Fantastic Four and more X-Men will be coming this Fall. That and characters from the Marvel Knights line. This makes sense with the inclusion of Ghost Rider here, but there is nothing more on just who will be making that leap there. This is where The Punisher and the "more adult" heroes live, and with the Defenders and Moon Knight in the mix, I am a bit curious to see who else will be coming in for Ultimate Alliance 3. Morbius maybe? The roster of the Thunderbolts that are not in there yet?

The Marvel Ultimate Alliance series returns for the first time in 10 years—with a new action RPG—exclusively on the Nintendo Switch system! Assemble your ultimate team of Marvel Super Heroes from a huge cast including the Avengers, the Guardians of the Galaxy, the X-Men, and more! Team up with friends to prevent galactic devastation at the hands of the mad cosmic tyrant Thanos and his ruthless warmasters, The Black Order.

Is the roster for Ultimate Alliance 3 filling up as you were hoping for or are there still characters you are hoping to see? Do you think the Expansion Pass will house more of the off-the-wall characters in their mix or will it be straight forward in what we get? How much more story will be added in with this pass and what modes are you hoping it will bring with it? Let us and the world know what you are thinking down in the comments and then feel free to discuss. There will be more for Marvel Ultimate Alliance 3: The Black Order, and as it flows out there, we will have it up on the site. Stick with us as we try to get everything out to you as best that we can over here.