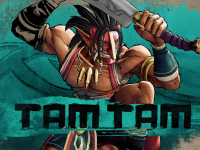 The fighters keep rolling out for Samurai Shodown, as we now have word that Tam Tam will be back in the fight and bringing the same style of fighting back to the franchise. Not a huge shocker as Tam Tam has been in so many titles over the franchise's run, but we can rest assured that he will be here on SNK's current outing. That and it means we have a new trailer to look at for the character and how he will look and play in this Samurai Shodown. Given that we have until June 25th to get prepared, it is nice to have it all now. Just before E3 and such…

As is to be expected, Tam Tam is here using all of the same tribal warrior style we can expect in Samurai Shodown. At least in this form, as it looks like the team is diving into that here. Weirdly, and maybe it is just me, but he looks to be one of the slower moving fighters that we have had here for the game so far. At least in general. Once the big blade gets moving, it looks like he will be a force to be reckoned with in Samurai Shodown. Have a look at the character just below and get ready for the short wait to be able to see how he will actually play in our hands.

Welcome Tam Tam, a warrior from a South American village called Green Hell (hmmm, ominous). As a kind-hearted young man with strong family bonds, he enjoys peace and spending time with his little sister. But when danger comes knocking, Tam Tam straps on his divine mask to unleash a unique fighting style that incorporates his massive stature and signature Henge Hange Zange blade. When his community is in danger, Tam Tam is always ready - making him his village’s greatest warrior and hero.

Do you agree that it looks like Tam Tam is one of the slower characters in Samurai Shodown or am I just seeing things again? Do you think that we may get to see more of the tribe in the actual game or will it be just in the big move we get in the trailer here? What other characters are you still waiting to see make a comeback in the franchise or have they already been revealed? Let us all know down in the comments and then feel free to discuss. As more for Samurai Shodown drops on us, we will update you here. Keep checking back for all of that as we get closer to launch.