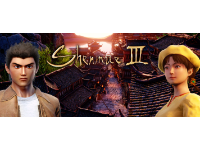 It looks like the wait is going to continue for Shenmue III as it has been delayed until November now. It feels like so long ago that the game was announced as coming and the Kickstarter started up by Ys Net and was completely funded shortly after. Thankfully, this delay is only by a few months as Shenmue III was slated for an August 27th release on the PS4 and PC, and is now set for a November 19th date for the same platforms. Not the biggest of delays if you get past the initial wait for this one to be announced in the first place.

The reason for this delay is not fully defined, but it is assumed to be the same "polish" that many other titles usually get when delays hit. With the anticipation as it is for Shenmue III, it makes sense that all involved will want it to be done perfectly to impress us all. I would say that a few extra months is the right price to pay for that level of assurance. At least the perception of that assurance is something to be had. Here is the official announcement that has come out of it all for those not keeping up on the Kickstarter updates.

Today, Yu Suzuki & Deep Silver would like to give a message concerning the release date.

Whilst almost ready, the game simply needs a little more refinement before being truly finished.

We feel that the extra time we have will help us deliver the true Shenmue experience players around the world deserve!

We thank you for your patience and understanding,

How do you feel about Shenmue III being delayed just a bit more? Do you think it is for final testing or to improve on character models for the game or is it something else? Will we all be glad with these delays or will it be something that spurns gamers into some level of outcry? Let everyone know what you are thinking down in the comments. If there is more to update for Shenmue III, it will be here on the site. Just be sure to keep checking back in for all of that as we head closer to the release date now.