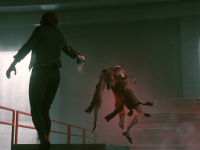 In just over a week, we will all have a media blitz with E3 and it looks like it may be starting earlier, as usual, with Control. That is, we have a load of new screenshots for the game before it is shown off in a final form by Remedy out at the event. It still is releasing on August 27th, so there is still plenty of time to be teased with new gameplay videos and the other bizarreness we have seen in the past. For now, we will focus on some of the new images for Control and see if there is much that we can glean from them all. If anything…

As one could assume, there is little context to these images from Control, but it does look like there are some interesting looks for the Hiss, if that is what they are still, in the game. We also see that Jesse may not be along in the game, in general, as we see more of a militant force and other staff here. My guess is that they will be there for story progression and then be moved along instead of affecting any actual gameplay. Gameplay that is looking more explosive than we have seen in the past for Control. I guess that is how it goes when you have a year to expand upon something that looked amazing already.

What thoughts do you have for Control after looking through these new images? Do you think any of these extra characters will add more to the gameplay or will they be in there just for story? Do you see many of the upgrades to the game since we had a good showing at last E3 or does it look the same to you still? Let us all know down in the comments and then feel free to discuss. For more on Control as we get closer to launch, be sure to keep checking back in here. We will keep everything flowing out there as best as we can.