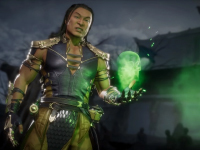 Before Mortal Kombat 11 launched we knew we were going to be seeing Shang Tsung back in action and using the likeness and voice of Cary-Hiroyuki Tagawa from the film. It was a nice treat to have back then when NetherRealm Studios was getting us all hyped up for the game and now we know when we will be able to add that character to our rosters. That would be June 18th for those that shelled out for the ability to have Early Access to the Kombat Pack for Mortal Kombat 11. June 25th for the rest of the world that want to pick him up outside of the Kombat Pack on the PS4, Xbox One, Switch, and PC. No word on how that will be handled and the cost as of yet.

In addition to that, we also have a nice tease of a few other characters coming to Mortal Kombat 11 with one of the biggest hopes being confirmed. Spawn will be joining in the fight here at some point as one of the other guest characters in the mix. Two more are coming in that realm, but more on that below. The other characters confirmed to be coming to Mortal Kombat 11 at this point will also be Nightwolf and Sindel. Not specifically the characters I was hoping for from the classic fighters, but it will be interesting to see how they are worked into the mix and the story that they will have along the way. No word on when any of them will be showing up, but the best guess is a month or two between each release.

The Kombat Pack for Mortal Kombat 11, which had the best launch in the franchise’s history, will include:

All characters, skins and gear sets will be released in the coming months, beginning with Shang Tsung on June 18 as part of the early access incentive for PlayStation 4, Xbox One, and PC. The Kombat Pack is available now as part of the Mortal Kombat 11 Premium Edition for $99.99 (SRP) or individually for $39.99 (SRP).

Additional information for the confirmed new characters in the Mortal Kombat 11 Kombat Pack is provided below:

Spawn — Todd McFarlane’s Spawn is one of the world’s best-selling and longest-running monthly comic books, with hundreds of millions of copies sold worldwide in more than 120 countries and 15 different languages. The Spawn comic book tells the story of Al Simmons, an elite government assassin who was betrayed and killed by the CIA. Instead of dying, he sells his soul to Hell for a second chance at life, and becomes Spawn, an unstoppable soldier fighting the underworld. Spawn is voiced by Keith David, the original voice actor from ‘Todd McFarlane’s Spawn,’ the Emmy award-winning HBO animated series.

Shang Tsung — The soul-stealing sorcerer and historic host of the Mortal Kombat Tournament. Shang Tsung pledged his eternal loyalty to Shao Kahn in exchange for a dark power, but he is no faithful servant. He dreams of the day his sorcery will overtake Shao Kahn’s, and he’ll pay any price to get there. Actor Cary-Hiroyuki Tagawa is lending his voice and likeness to the popular character he portrayed in the classic 1995 Mortal Kombat film. Additionally, Shang Tsung will be available for consumers to play before release during the Electronic Entertainment Expo (E3) from June 11 to 13 in the South Hall at the WB Games booth (#1023).

Sindel — The former Queen of Edenia and will stop at nothing to keep her place. Threatened with the loss of her throne when Shao Kahn conquered her realm, Sindel betrayed her husband, and her people, to keep her privileged position. Now, as Shao Kahn’s wife and Queen of Outworld, she enjoys power and wealth beyond most people’s imagination.

While we have four of the six confirmed now, there is a lot of speculation on the other two guest characters coming to Mortal Kombat 11. If you pay attention to the end of this trailer here, you may hear a few extra tidbits that could give hints. One of them being the chainsaw revving up and since we had Leatherface already, the next option would be Ash from the Evil Dead. Mix in the fact that Bruce Campbell has cryptically tweeted a few things about it, I would say that is a safe rumor to go with.

The next DLC character rumored for Mortal Kombat 11 based on this would be the Terminator from the film of the same name. This is another character fans have wanted to see in the game over the years and if you listen to the music at the end of the trailer it does sound like the theme from the film. This would be a very loose rumor to take for Mortal Kombat 11, but it is floating around out there and would be nice to see. I guess we will find out sooner or later.

What do you think about the way Shang Tsung plays in Mortal Kombat 11 here? Do you think that he will be able to use more than the ninja characters in his moves or will that be there just for balancing issues? Do you think that we will see Ash or the Terminator in the game and will they too be voiced by their respective actors? Let us all know what you are thinking down in the comments and then feel free to discuss. When we have more for Mortal Kombat 11, we will share it all here for you. Just be sure to keep checking back in for all of that and more.