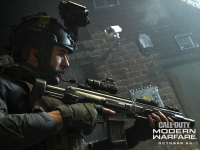 The next Call Of Duty title is officially announced and it looks like it will indeed be Call Of Duty: Modern Warfare

The time is finally here and it is time to reveal what this year's Call Of Duty will be, and it will be…Modern Warfare. Yes, it looks like all of the rumors are true and Infinity Ward will be back bringing us a reboot to the Modern Warfare line of the franchise. It messes up the numbering, sure, but at least we are set to get back on track with a single-player campaign and some over-the-top visuals as you can see in the trailer that released with this announcement. All of which brings some interesting and new things for Call Of Duty: Modern Warfare that you may not have expected for its October 25th release date.

In addition to bringing back the campaign mode for Call Of Duty, it looks like the multiplayer is getting a bit of a change too. All in the way of no longer having a Season Pass for the content and also making sure that all players can kill each other no matter their selected platform. Yes, it looks like this Call Of Duty will also have cross-play between the PC, PS4, and Xbox One when it launches. Yet another huge deviation but something that fans of the franchise have been dying for over the years. On top of the removal for timed platform exclusives. Although, that could still be a thing as there has not been any mention of all of that as of yet.

Prepare to go dark, Modern Warfare is back! The most celebrated series in Call Of Duty will make its highly-anticipated return when Call Of Duty: Modern Warfare launches October 25th in a powerful experience reimagined from the ground-up. The all-new title, published by Activision and developed by Infinity Ward, engulfs players in a modern-day conflict, where split-second decisions could affect the global balance of power. The new Modern Warfare features a unified narrative experience and progression across a heart racing, epic single-player story, an action-packed multiplayer playground, and new cooperative gameplay.

Starting today, fans can pre-order the digital version of the new Modern Warfare and receive a prestige token to be used immediately in-game in Call Of Duty: Black Ops 4.

Call Of Duty: Modern Warfare is scheduled for release globally October 25th on PlayStation 4, Xbox One, and PC. The title features a fully-optimized PC version, developed in partnership with Beenox, which will be available exclusively on Blizzard Battle.net, Blizzard Entertainment’s online gaming platform. Call Of Duty: Modern Warfare is published by Activision, a wholly-owned subsidiary of Activision Blizzard (NASDAQ: ATVI) with development led by award-winning developer, Infinity Ward, with additional development support from Raven Software.

Are you impressed and excited at the look of this year's Call Of Duty or do you still think they should have taken a year off from the franchise? How well do you think the cross-play will work in the game and will it run as smooth as gamers demand now? How do you think we will have to go about accessing the expansion content given that the Season Pass is not going to be a thing here? Let us all know down in the comments. We are excited for Call Of Duty: Modern Warfare and will be keeping all of the information flowing out there for it. Just be sure to keep checking back in here for all of that and more.