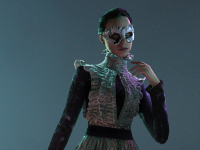 The final core clan for Vampire: The Masquerade — Bloodlines 2 is announced with the Malkavians spreading their chaos in Bloodlines 2

The fifth and final full clan for Vampire: The Masquerade — Bloodlines 2 is announced and it looks like we are all going to be mad. Not in the angry sense of the term but in the insane version of the term as Hardsuit Labs is going with the Malkavian clan as the other option we can have. At least in the core version of Bloodlines 2 with the other clans a possibility via free updates. Something I am hoping will actually happen as my true favorite ones do not seem to be in the core game, but at least we have the Malkavians mixed in now.

For those not in the full know, the Malkavians are the insane vampires in the tabletop version of the game and now in Bloodlines 2. It is a rough clan to do right as many want to go with the zany and wacky kind of insane and not the deep and dark version of it all. It sounds like they are going to try to go dark with it in the game, but we will need to wait and see. At least it looks like Bloodlines 2 will have Dementation as one of their powers, as well as Auspex, and it is all about driving others insane or filled with more emotion than normal. It is hard to explain and with no gameplay to truly dissect, we will have to wait and see until June 10th. That is when we will have some true gameplay.

Malkavians have been traditionally ostracized by the Seattle Kindred. While a few managed to claim territory in less desirable districts, very few have ever managed to rise to the levels of the other clans. Because of this, there is a persistent bias against the Malkavian clan that still exists into modern nights.

None of the many nicknames for Clan Malkav — "Lunatics", "Jesters", "Visionaries", "Madmen", and so on — is as fitting as "Oracles". To be of the Clan is to understand things nobody else does; and to be affected by that understanding. Among the clan, this shows itself in psychosis, depression, compulsive disorders, or uncounted other mental illnesses. This hasn't kept the Clan of the Moon from finding a place in Kindred society. Advisers, strategists, preachers, hunters and yes, rulers; all Malkavians walk their very own path.

All Malkavians see further than a mortal could. No Malkavian is left untouched by what they see. Their signature Discipline allows the clan’s members to impart an imperfect version of their psychosis on others, with often drastic results.

• Haunt (Blood Cost: 2), the first active Dementation power, imparts an unseen spectre in the victims’ minds. Unable to control themselves, they’ll try to flee in a panic. The • • and • • • • • slots upgrade Haunt.

• • • Berserk (Blood Cost: 4), the second active power, fills the vampire’s targets with an uncontrollable rage, causing them to lash out at anything nearby — even the air itself, if no better target is available. The • • • • and • • • • • slots enhance Berserk.

Use of Dementation, while thoroughly unsettling, is not a Masquerade Violation.

Nothing stays hidden to those who gain the Discipline of Auspex. Their senses expanding beyond the boundaries of their bodies, these Kindred slip ever deeper into their condition.

• Aura Sense (Blood Cost: 2), Auspex’ first active, makes the vampire spot NPCs even through walls, read crowds at a glance, and mark individuals, staying aware of them even over long distances. It also reveals the weaknesses in the marked NPC’s attack and defense. The • • and • • • • • slots enhance Aura Sense.

• • • Psychic Projection (Blood Cost: 2), the second active, forces the vampire’s mind from their body. Untethered, they will explore the area in astral form, remaining free to use Aura Sight to mark any character they spot. Even more: The vampire’s own senses have developed to such an extent that they may end up telepathically overwhelming the senses of others for a short while. The • • • • slot enhances Psychic Projection.

Use of Auspex is not a Masquerade Violation.

I do find it odd that Bloodlines 2 does not sound like it will be using any Obfuscate in the game. The Malkavians being one of the few clans that have that in the tabletop version. That would be an easier power to implement in the game as it deals mainly with stealth. To me, that reads like Bloodlines 2 will not be focusing on that kind of gameplay in the main way. That or they do not want us to have an easy time with it all. I guess we will have to wait and see when we actually get the game and find out if we will get the other, and better, clans in the mix.

Are you glad to see the Malkavians in Bloodlines 2 or were you holding out for a different clan than the basic ones? Do you find it odd that they are leaving out the stealth style of powers or will that be explained in the game? Do you think that we will see the other two more basic clans come if they are able to do DLC for the clans or could they still leave the more exotics ones for that? Let us all know down in the comments and then feel free to discuss. As we learn more for Vampire: The Masquerade — Bloodlines 2, we will add it to the site here. Just be sure to keep checking in on the site.