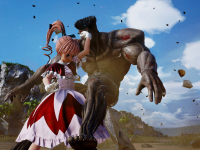 The next DLC character for Jump Force is the way as we can now see it is Biscuit Krueger from Hunter X Hunter. This is a character I am vastly unfamiliar with but I am certain fans of the genre and this game will be. Maybe not. That does not change the fact that this will be the next DLC character coming to Jump Force and we will soon be able to see how the character flows in the mix of it all. My guess is that Bisky will have all of the super strength and such that is listed with the character via a basic internet search. Do not be upset and just enjoy the new screenshots we have.

That is right. We have new screenshots for Jump Force and this character and we get to see her go from the cutesy version to the massive and more masculine body type for special moves in the game. I am sure that makes more sense when you know the manga and what Bandai Namco has done with them. Maybe we will have a new breakdown video before they hit Jump Force, but as of right now all we have are these screens. Have a look and see if this will be a character you want to pick up for the rosters.

Don't expect Biscuit to play around, this heavy hitter is going all out when she joins the Jump Force roster on May 28th! Get the Character Pass today and receive early access to Biscuit on May 24th! What are your thoughts on Bisky here for Jump Force and is this the character you have been dying for to join the fight? Does this character make sense to you or are you a bit confused as I am? What other character(s) are you hoping to get to see join in this fight and will we ever see them? Let us all know down in the comments what you are thinking and then discuss. For more on Jump Force, be sure to keep swinging back in here. We will keep the updates coming. Even if we have no clue who the characters coming are.