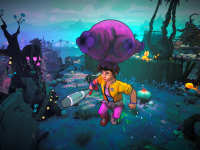 If you have been following along with RAD since it was first revealed a few months ago, then you know that there is a closed beta for the game in the works. Maybe you missed out on that as you have been paying closer attention to the other titles Double Fine is pumping out there. Nonetheless, that is not the bigger news here as it looks like we have a final date that we can expect to see RAD hit the PS4, Xbox One, Switch, and PC. That date is now set down as August 20th for those out of the loop and not in on the closed beta cycle as of yet. We will forgive you for now.

Yep, it looks like RAD has had a fairly solid turnaround from announcement to launch here and it looks as if it is shaping up to be an interesting experience. It is a 3D-action rogue-like where we are the prophesized one who will help usher in the rebirth of everything after Armageddon happened. The ending of the world and not the film of the same name. Although I would not be too shocked if RAD made references to that along the way given all that are involved with the game. You can see what you may be in for just below and then know we only have a little longer to wait for the butt-spider gameplay.

A 3D action rogue-like set in a post-post-apocalyptic world, where humanity has faced Armageddon not once, but twice. RAD will be available on August 20th for Steam, PlayStation 4, Nintendo Switch, and Xbox One.

In RAD, players take on the role of a teenage protagonist who must venture into the Fallow — an ever-changing, radioactive wasteland filled with unknown and unspeakable creatures. It’s here that they’ll find the solution to heal the world, and transform the cracked, barren landscape into a lush source of new life. But humanity’s future comes at great personal cost, as the deeper they journey into unknown lands, the more they will expose themselves to gnarly toxins which will wreak havoc on their fragile human form.

The fate of the world depends on the player, a sweet bat, and whatever strange new abilities they gain as the world around them ravages their body — twisting and mutating them into something far less than human, but far more powerful.

Are you going to be ready for RAD to launch on you in a few month's time? Did you expect to see this fast of a turnaround from reveal to beta to launch or did you expect more time to pass? Are you curious about how the butt-spiders work into it all or does it matter at this point? Let us all know down in the comments and then feel free to discuss. For more on RAD, be sure to keep checking back in on the site. We will do what we can to keep all of those updates flowing out to you for this title and many more.