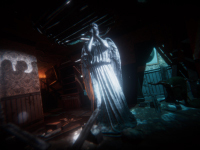 A new VR game in the Doctor Who is announced and coming at us this September with Doctor Who: The Edge Of Time

It is time to get ready to travel through time with Doctor Who again as we have a new VR title for the franchise coming. This time it is coming from Maze Theory for the Oculus Rift, HTC Vive, and PSVR. Yes, all of the major platforms for it all and set in the current state of the TV show. Something quite exciting in my eyes even if we only have limited information on Doctor Who: The Edge Of Time. That would be the name of the game and here is the little bit more we know for it all.

Something has caused a rift in time and it is up to us to find the Doctor and set things right, as it always seems to be in Doctor Who. We will need to solve puzzles throughout time and set things back in order for it all. All while dealing with classic and new monsters in the universe ranging from Weeping Angels to Daleks to some new ones created just for Doctor Who: The Edge Of Time. The Daleks will be the main antagonist of the game, but I am sure that the rest will stop you in your tracks and maybe make it so you cannot move along. Fans will know where I am going with that.

Doctor Who: The Edge Of Time

Armed with the iconic Sonic Screwdriver, players will solve mind-bending puzzles, grapple with classic monsters and encounter new horizons in a quest to find the Doctor and defeat a powerful force that threatens to destroy the fabric of reality. They will face the infamous Daleks and other known faces from the Doctor’s universe plus some brand new never-before-seen monsters as they travel through stunning cinematic environments that truly bring the show to life!

The Doctor has been hurled through time to the end of the universe. A virus that threatens to rip apart reality itself has been unleashed. Players can pilot the TARDIS on a journey across worlds both familiar and strange to recover a series of powerful time crystals that can repair spacetime and ultimately save the universe itself.

Are you excited to see that we are getting a new Doctor Who title and have it set in the VR space? Do you think that the eye tracking just shown off for some of the headsets will play a factor in the game or will that be too advanced for this title? Are you excited to know you will be able to pilot the TARDIS in the game? Let us all know down in the comments and then feel free to discuss. When we learn more for Doctor Who: The Edge Of Time, we will update you all here. Just be sure to keep checking back in on the site to learn it all.