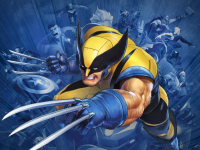 Now that we are getting closer to the endgame for Marvel Ultimate Alliance 3: The Black Order and months out from launch, I guess it is a good time to start seeing how some of these characters will play in the game. It makes sense and also gets fans a little more excited to actually buy it all. This is just why we are here today with the latest gameplay showing for Ultimate Alliance 3 in the way of Wolverine. One of the characters that will be the go-to for so many players, I am sure. He is one of the more popular in the comics and films, so it makes sense for Team Ninja to have this murder machine fully active on the Switch this coming July.

All jokes aside, we have a look at Wolverine in action for Ultimate Alliance 3 and a breakdown of what his powers and abilities actually are. Get ready to not be shocked as it looks like it all carried over from the previous games. He obviously has his claws and healing factor with a few of the lesser powers he is known to have. His abilities range from hitting one person with his claws to hitting a lot of enemies with his claws. He can also get angry and boost his stats a bit. Just about what he was in the past Ultimate Alliance titles. Why fix something that is not broken, right? Have a look for yourself just below.

Claw Strike: Wolverine slashes forcefully with both sets of claws, then finishes with one last big slash.

Adamantium Assault: Wolverine jumps and performs a spinning uppercut that draws enemies closer and slices them to pieces.

Berserker Barrage: Wolverine jumps forward while spinning and slashing at anything in his way. Players can hold the attack button to aim this attack.

Primal Rage: Wolverine get angry. His attack power increase for a short time and he glows with rage.

Wolverine has a lot of health and durability as well as a natural healing ability that makes him an ideal tank. He loves to mix it up close range, but he also has a few moves that allow him to dart across the battlefield. This knucklehead is great for managing large groups of enemies and giving other players some room to breathe.

Are you at all surprised with how Wolverine is being handled in Ultimate Alliance 3? Did you expect to see more than a mad little fur ball that can heal any damage? How do you think he will be able to team up with others or will it be the same basics we have seen in all video games with the character in the past? Let us all know down in the comments and then feel free to discuss. It looks like more for Marvel Ultimate Alliance 3: The Black Order is flowing out there, so expect to see it here. Just keep coming back to the site so you can be kept up to date on it all.