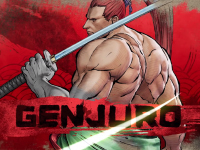 There were quite a few confirmations for Samurai Shodown this week and we are back with two more in the chamber. Two more in the way of two more characters that we will see in the game and get to slice and dice others with. I have a feeling that SNK is looking at the new release date for Samurai Shodown and realizing we need to get the full roster out there, so here we are with word that Haohmaru and Genjuro will be two more of those fighters to grace the scene. A different kind of grace when all is said and done, though.

There is not much to say for either of these characters as they are flowing out there and look to be about what we should expect in Samurai Shodown. Both look to take on the samurai look and feel, with a few extra bits of flair mixed in, but both look to be par the course in terms of fighters. Maybe they will have some deeper nuances when Samurai Shodown finally does launch. Maybe they will not. Every fighting game needs these kinds of characters and these two definitely fit the bill. At least as they stand here in these trailers. Have a look and see if you agree.

A laid back, wandering swordsman with a fondness for drink, Haohmaru is just as likely to spend his day in his sake jug as he is looking for a worth opponent to embrace death

Genjuro is a man of many vices. Be it gambling, drinking, or fighting he always commits fully to whatever he is pursuing. With powerful slashes and strikes, no one can stand in his way. Embrace death with Genjuro June 25th!

Do you agree with me on these characters for Samurai Shodown or do they look and feel different than I thought? Were these the expected ones to be shown off this week given the release date announcement or is it a surprise for you? What other characters or character types do you think we will see in the coming weeks? Let us all know down in the comments and then feel free to discuss. If there is more to share for Samurai Shodown, we will share it all here. Just be sure to keep checking back in for all of that as we head onward toward the launch.