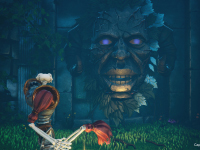 It was certainly a huge day during the State of Play stream yesterday, as we also had a nice new look at MediEvil in the middle of all of the other great announcements to be had. Not only a new look at how Other Ocean Interactive is bringing this classic title back to life for us all, but also a nice look at when we should expect to see the game drop on the PS4. The broad timeline would be Fall of this year. The more specific date is to look for MediEvil to drop on October 25th of this year. Right around the time we should be looking for dark and grim games to keep us rolling through Halloween.

Now that we have the date out of the way, we can focus in on the latest part of the story and gameplay we were also given for MediEvil during the stream. If memory serves, it is not too different than what we knew from before. It just has some different twists and takes that we could not get back on the older systems when the game dropped before. Just about what we should have assumed for this remake that is not being given the subtitle of a remake. That is not to slam MediEvil in any way, though, just that fans of the original should expect to see close to what they remember with some new flashy graphics and gameplay to go along with it all. Have a look at the latest now.

Re-live the original adventure on PlayStation 4. The beloved fan-favorite has been completely remade from the grave up, blending classic gameplay with stunning visuals, all in eye-popping 4K!

Step into the bones of Sir Daniel Fortesque, a slightly-inept (and long dead) knight accidentally resurrected by his greatest enemy, the evil sorcerer Zarok. With a second chance to foil his greatest foe, Dan will once again set out to save the kingdom of Gallowmere and earn his place as a true hero.

Are you at all surprised that MediEvil will be following the line as it is or does that even matter to you? Did you get a chance to enjoy the original or will this be a fresh title for you when all is said and done? Do you suspect this will open the doors for many other titles along the way or will this be a one-and-done venture for the franchise? Let us all know down in the comments and then feel free to discuss. For more on MediEvil as we get it, be sure to keep checking in. We will have more of these updates as we head into the big reveal season just before the launching season.