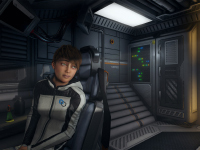 In the seemingly endless run of all the dark and grim first-person games coming out, it is nice to see another puzzle and platforming game get the announcement as Claire de Lune just did. That should be given from the little bit above this line, but that is what we have here from Tactic Studios for their latest title. As I mentioned, it will have a nice first-person look to it all, but only as far as perspective and use of mechanics as it will be a puzzle game much like was have seen in the past. That is not to say that Claire de Lune is a clone of past titles, but you can feel some of their influence on this game. Titles like Portal and Q.U.B.E. come to mind. If you have not already skipped ahead, you will see what I am talking about shortly.

In Claire de Lune, we will be taking on the role of a smuggler named John sometime in the future. Things have gone south in the latest run he was undertaking with his daughter in tow. This is where the rest of the game picks up, as we are now on a quest to find Claire on this new world John finds himself on. As you can see in the trailer, he will have a little AI buddy along for the trip and a cool little gun that will produce some physics-based items into the world to make traversal a little bit easier. Have a look at the trailer and see just how some of this will pan out. It is a small dev team, so it could take a bit until we see the game hit the PC. So far, it looks like it will be worth the wait for anyone who enjoys the type of games mentioned above.

Claire de Lune offers puzzle solving, platforming, stealth sequences, and first-person combat, combined with an engaging character-driven storyline. You play as John, a smuggler on the run with his daughter, Claire. After crash landing on a foreign planet, John is separated from Claire. He must use his ingenuity, agility, and a few handy pieces of technology to find Claire, repair his ship, and escape safely. However, as John progresses further, he soon discovers that the planet is more mysterious than it initially seems.

What thoughts do you have for Claire de Lune based on this announcement and the bit we have seen thus far? Does it look to be another great addition to the puzzle/platforming genre or will time need to pass before you can judge? Do you think it will take quite a while for this team of five to get done or could they be close and just giving this announcement to build hype? Let us all know down in the comments and then feel free to discuss. When there is more to share for Claire de Lune, we will certainly share it all here. Just be sure to keep coming back to see and hear all of that in due time.