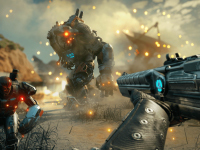 The hype for RAGE 2 is starting to flow out even more with just a week out from the official release of the game. There is no doubt that we have not seen a lot of this from Bethesda over the past few months since the game was surprised announced, but we are in the endgame here for the cycle and that means much more. At least much more that will not spoil RAGE 2 and the hard work that Avalanche Studios has put into so far. This includes one more quick look at the enemies and locations of the game that we will soon be shooting up in the game. You might be throwing the wingstick instead, but I will go with all of the guns and such myself.

In the least surprising way, we have a new trailer here that jokingly dives into all of that for RAGE 2 while keeping most of it still well hidden. Something that I am sure most of us are grateful for, given all of the other events going on in the media as of late. None of which seems to truly break anything for the game's first playthrough as it is a short look at the multiple main locations of the world and a few of the enemies and factions we will see in RAGE 2. You can look at this video breakdown for them all instead of having them listed out for you here. It is more fun in that aspect than having to read more of my piss-poor writing.

RAGE 2 — An Anarchist’s Guide To Enemies And Locations

An anarchist’s guide to the main attractions of the wasteland and all the homicidal maniacs who inhabit it.

Are you still looking forward to the release of RAGE 2 or was this a good reminder that it is still coming? Do any of these new enemy types and factions truly surprise you or do they seem about standard for the post-apocalypse setting we normally get? How are you feeling about all of these locations out there and do you have one you are dying to get to right away? Let us all know down in the comments and then feel free to discuss. When we have more for RAGE 2, in any form, we will share it all here. Just be sure to stick close to the site so you do not miss a single update.