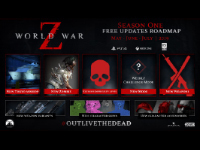 By now it is easy to assume that many have played and enjoyed all if not most of what World War Z had to offer at launch. There is quite a bit in the game and we already knew there was much more to come out of Saber Interactive post-launch. Specifically, a new Tokyo mission that was revealed well before launch for the low price of free. This is just the first of these updates and now we have details on what and when more will be coming to World War Z to give us more of that Left 4 Dead feeling. Not in a way that this is going to clone that game, but in the way of expanding the similar gameplay and enjoyment of fans the world over.

May will obviously see the new location and a new zombie type for World War Z drop. Most of which we already knew. June will then follow up with a new six-skull difficulty setting that will come with its own rewards and bragging rights. Also the usual cosmetic changes we all love so much. Then in July, we can look for more of those cosmetic updates and a new Weekly Challenge mode. None of this is detailed out much more in the following image and write up for World War Z, but does it matter when all we are asking you to do is keep playing the game? Well, not us specifically, but the developer and publisher. Saber Interactive, in partnership with Focus Home Interactive, has announced the first phase in its post-launch content roadmap for World War Z, the action-packed co-op shooter inspired by Paramount Pictures’ blockbuster film. After celebrating more than 1 million units sold in its first week of launch on PlayStation 4, Xbox One, and Windows PC via the Epic Games Store, the World War Z team is moving forward to deliver new gameplay, features and improvements to the game month to month.

In May, a brand-new mission set in Tokyo will drop alongside a terrifying zombie type that spits a deadly virus and can resurrect if not properly dispatched. June will bring a new six-skull difficulty setting with a unique reward, as well as bonus cosmetics and more. And in July, players can discover the new Weekly Challenge mode, plus additional cosmetics and other goodies.

Other major upgrades in development for further free updates include a wave-based survival mode, private lobbies, the ability to switch classes during PvPvZ matches, field of view (FOV) and level of detail sliders on PC, and more.

Are you excited to see what all of this will bring to World War Z in the longer run or will it be coming too late for you? Were you hoping for more than cosmetic things or are you glad about these little extras to keep you going in the game? Could we see this expanded out much more as the book was or will we see these four locations and stories and see nothing more? Let us all know down in the comments and then feel free to discuss. For more on World War Z when we have it, be sure to stick right here. We will keep it all coming at you as best and fast as we can.