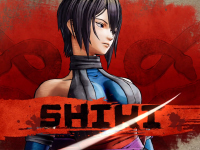 The next character for Samurai Shodown is here now as we get to see Shiki come back for this fight now. Yes, it looks like SNK is digging back to the Neo-Geo days and pulling one more character into the modern age for this game. Given how long it has been for a good Samurai Shodown, it will be forgiven. Unlike some of those other fighting games that just keep looking to recycle characters ever release instead of bringing a whole new roster. That is the last I will complain about that here as the new-ish character is the focus we are here for.

You can see Shiki in action just below in the latest for Samurai Shodown, but I will say that she looks to be one of the more fluid characters I have seen so far in the game. Even if she is starting to look like a blending of a few other characters from other games in the past, I will still take it. That is how a fighter like Samurai Shodown should flow and if they need to use other ideas and references to pull it off, I will forgive. Have a look and see just what I am talking about down below and get ready for the game to launch on June 27th for the PS4, Xbox One, Switch, and PC.

Originally debuting in Samurai Shodown 64, Shiki is a mysterious woman with seemingly no past, having awoken on Mt. Osore with no memory of her origins. Forgetting everything but her name, and owning no proof of her identity, she picked up two swords found at the base of the mountain and embarked on her journey. With her unconventional attacks and looks, no swordsman stands a chance against her.

Are you glad to see Shiki back in for Samurai Shodown or did you think she would be left out for this version? Do you agree that she looks like an amalgamation of other characters from other games or have we been too saturated to see originality anymore? What other characters are you hoping to join the fight for the game? Let us all know down in the comments and then feel free to discuss. For more on Samurai Shodown, be sure to keep checking in here. We will keep the updates flowing out there for you as best we can.