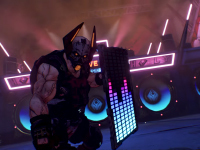 We finally have it. Some actual gameplay for Borderlands 3 and not all of the normal teasing that goes into the announcement and follow up videos we normally get with games like this. Gearbox could have gone that way, but instead hyped up and then delivered a whole lot of new gameplay for the game to show off the new look, characters, classes, and other features that will certainly get all of the Borderlands fans riled up. At least the ones that happened to miss out on the large event that took place earlier. Gamers work and have lives, sometimes, and that is why we are dishing it all out here again.

The first this we will start off with is a nice little tease for the gameplay of Borderlands 3 looks like. Oddly enough, this is what followed everything after the big reveal. It does not go into any of the finer details of mechanics or what is going on specifically, but it is a nice stepping-stone and a shorter showing for those who do not have the time watch the full event. Even when this is a small fraction of Borderlands 3, their words, it looks like there is so much going on that we will get lost in the world of Pandora and all of the others we will be hunting vaults on. Yes, more worlds are coming for us all.

The original shooter-looter returns, packing bazillions of guns and an all-new mayhem-fueled adventure. Blast your way through new worlds and enemies as one of four brand new Vault Hunters, each with deep skill trees, abilities, and customization. Play solo or join with friends to take on insane enemies, collect loads of loot and save your home from the most ruthless cult leaders in the galaxy.

Now that you have been teased, let us dive into the larger scale of Borderlands 3 and just what we can expect. It is a shooter-looter still, so expect all of those basics out there. For some reason, there was some focus on the ability to crouch slide and vault up. The bigger change looks to be some of the cover will degrade all over the map and not just in specific instances. What was truly showing here is how the co-op gameplay will scale in Borderlands 3 so you can play with your friends no matter where they are in level in the game. So will the loot that can be instanced for each player so there is no worry about missing out on anything if that is an option you want to play with. No more will you be playing with a lower-level player and only see low-level gear that they snake away from you anyways. Unless you want to play that way.

You can obviously have a look at all of that running down below as well as just how cool some of the worlds look in Borderlands 3. There is also a good look at the Sanctuary III and the denizens onboard there. All of which is said to be customizable in the game as we use it to travel around looking for all of those vaults out there. Most of which will be guarded by mini and major bosses along the way. It would not be a Borderlands game if that were not also the case. Have a look and see it all again or for the first time depending on your situations.

What thoughts do you have on the new gameplay we have for Borderlands 3? Does it live up to your hype or does it look like another sequel using the same tropes and mechanics to suck more cash out of us? Do you like the co-op options we are given or will you always go with the classic setup no matter what we are given? Let us and the world know what you are thinking down in the comments and then discuss. We will have more for Borderlands 3, and when we do, it will be on the site. All you need to do is keep swinging on by to see and hear all of it before launch.