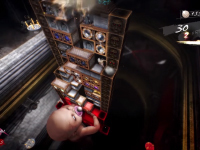 A new trailer for Catherine: Full Body is here to take us into more of the new aspects of the game as well as other new scenes to expect in Catherine

One more trailer is out for Catherine: Full Body to remind us that this version of the game is not only coming, but also it will house a few new scenes and elements that were not in its original release. This is not the larger of shocks as this version of the game is already out there from Atlus in the Japanese market. This is more of a reminder for the Western markets that this new version of Catherine is coming and will have more to it. Not in the way to make it a completely new title, at least, but more in what looks like elements that had to be removed the first time it hit the PS4.

In this new trailer for Catherine, we get to see more of the Rin character of the game with a few of the new cutscenes and features we will get to explore. There is a new Remix Mode for the game that we will be able to use in the core of it all, but this trailer does not seem to go into it much. It looks to focus more on what was mentioned and the horrors of infidelity in this twisted title. It is not something that we will be praised for in Catherine. It will be something we will be punished for if what I am seeing is correct here. Again, not the biggest of shocks for those following along in the slightest.

It’s said that those who succumb to infidelity are cursed. As they sleep, they’re drawn into a nightmare realm where they are forced to climb a treacherous tower of blocks, all while being chased by bloodthirsty demons. If they die here, they die in real life. This is where Vincent finds himself, and the only way he can avoid this terrifying fate is to climb his way out of it.

Get a good look at Vincent’s terrifying climb alongside some of Catherine: Full Body’s new cutscenes, cinematics, and features such as the all-new Remix Mode and Rin’s soothing piano in the new Death By Nightmare Trailer!

Are you ready for Catherine to come out again or did the novelty of it all wear off a while back? Do you think that the new scenes, character, and gameplay elements will be enough to resell this title? Have you already made up your mind on all of this and only came to see the trailer? Let us know down in the comments. I will keep updating everyone when there is something new for Catherine: Full Body. All you need to do is keep checking back on the site for all of those updates.