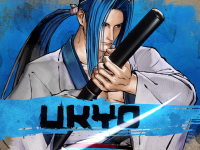 It is that time again to take a look at one more character coming to Samurai Shodown this June and this time it is Ukyo. A ladies man type of character that looks to use a quick draw technique to take down all of his foes. It all seems a bit odd to state that way, but it is how SNK has offered it up and showed us in the latest trailer we have. Sadly, it is another trailer that does not give much in the way of context on how Ukyo will actually function in Samurai Shodown, but it is something to look at an speculate on. It is a fighting game at the end of it all so it should be easy to think that everything we see will be a bunch of specific button presses and animations playing out.

The more interesting part here has to do with the fighting style that only seems to be played off in the background and not in an actual match for Samurai Shodown. While one does take place in the trailer, it looks like the quick draw only plays out in very specific and scripted instances. This is a bit odd to me as there are many documented styles that use it in a less comedic manner but were left on the floor here. This could just be part of the snazzy gameplay and reveal that we are getting for Samurai Shodown instead. It just feels a bit out of place and I do hope there is more to it all. At least as it goes for the fighter and game instead of personality.

Ukyo, a swordsman skilled in the lai quick draw sword technique. Ukyo is quite popular with the ladies, but only has eyes for his beloved Kei Odagiri. Although he suffers from an incurable sickness, he continues to fight for her. Don’t blink — no one can see his lightning-fast quick draw coming.

How are you feeling about Ukyo in Samurai Shodown as he stands here and do you like the inclusion? Do you find it a bit odd on what is focused on here in the trailer or does it make sense for the marketing side of things? Do you think we will see more of the specific style in the fight or will it be mainly in the flair and background of the character instead? Let us all know down in the comments and then feel free to discuss. For more on Samurai Shodown, be sure to keep checking back in here. We will keep all of those updates coming at you as fast as we can. You will not want to miss a single thing.