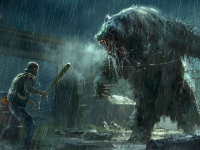 It is funny to think that we had been seeing so little for Days Gone before now and it now looks like Bend Studio is going into an all-out blitz of information and videos to drop. In fact, we have quite a few to go on with here as well as a small word on what will be coming after the game launches on April 26th. That is the shorter side of it all as it looks like Days Gone will have a harder difficulty that strips things down to the basics, removes out fast travel, and limits what is shown with the HUD. We will also be seeing new challenges for the Bike, Horde, and Combat as we progress forward after June of this year. Now we will have more reasons to keep playing the game after its 30+ hours of gameplay.

In that vein, let us dig into the first video we have here today as we go deeper into the Bike we will have in Days Gone. Not the biggest of secrets that it is coming and will have all kinds of upgrades and tweaks we can make to it along the way. It is interesting to see how the weather and roads will affect it and force certain upgrades if we want to see the whole world of Days Gone. Again, not the biggest of shocks as it is how games are when left to an open world, but now we have a slightly better look at how that will all play out in the game. Have a look at that just below and get ready for the bigger attack on the senses.

Deacon's bike is his critical advantage in Days Gone. Learn all about this invaluable vehicle before hitting the road when Days Gone comes to PS4 on April 26.

Content updates and the Bike are cool and all, but what about the other creatures we will have to deal with in Days Gone? We have seen a few in teasers and trailers before but most were left to feel like background noise and not a true threat. Zombie bears and wolves will prey on the streets and not be specific set pieces in the game. As will zombie crows in the game. All of which are local to the area Bend Studio is in and will be highlighted just a bit more in Days Gone than we previously thought. Now to duck out of the way of all of those murderous crows out there. I know what I did there…

Ragers. Runners. Criers. The Freaker virus has corrupted the wildlife of Days Gone.

Finally, and this one is just cool on a development side of things, has to be the latest look at the weather of Days Gone. It is set up to be dynamic and ever-changing, but we may not have known to what level it would be at. The following video shows the game transition from a clear-ish day to a snow-covered landscape by just waiting and seeing the snow fall. This is not done through some kind of loading screen or transition off-screen. No, we get to see the snow fall, turn to flurries, and accumulate on the ground to affect us as snow would. I am guessing this is the same thing for rain and other weather patterns in Days Gone, but it is interesting to see it in play here. It is a true marvel to behold for me.

Snowfall and Weather in Days Gone is not just about a change in the background or during loading, or just some area of the map. In Days Gone, snowfall happens randomly in real-time, so you can see the objects and road covered in snow over time. Amazing, unique technology.

How are you feeling about Days Gone at this point and have you seen enough to get your hype levels up for its impending release? Do you think that we will see more of the infected wildlife in the game or will it be these three different beasts? Are you as impressed as I with the weather patterns here or am I just nerding out for no reasons? Let us all know down in the comments and then feel free to discuss. If there is more to share for Days Gone, we will certainly share it. Just stick close to the site to see and hear all of that as we get closer to launch.