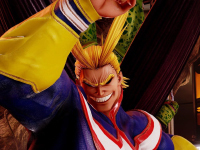 The DLC is rolling out for Jump Force as we have the announcement of the next character to join the roster in way of All Might. You may have guessed this from the image above and the image that the video below is stuck on, but just know that Bandai Namco is working on getting the roster expanded and we have this one coming in May. When in May? That is a good guess as there is no date attached to the video but just know the character is coming. That way we all know that Jump Force is going to have more justice in it than we could have assumed from before. As the tagline here states.

I am not the most up to date on all of the anime and manga going into Jump Force, but I do know that this character is from the My Hero Academia universe. I am guessing that he is also very strong given the name and what we get to see here in the gameplay. Feel free to judge as most of the time I am here just for the gameplay and actually playing things and not all of the lore that is built up over the years. Not to mention everything one would need to know for all of the characters going into Jump Force. Just know the roster expands and this is what is coming. Moving right along now…

Detroit…Smash!!! Get ready to Unite to Fight with All Might when the Jump Force Character Pass DLC releases May 2019.

Was this the character you were hoping to come to Jump Force or are you still holding out for a different one? Are you completely up on all of the manga and anime all of the characters come from or will you just enjoy the bits you know and then the rest? What other characters are you hoping will show up at some point? Let us all know down in the comments and then feel free to discuss. For more on Jump Force as we get it, be sure to stick close to the site. We will have everything that we can here for you.