The Walking Dead: The Telltale Definitive Series Is Coming With A Huge Collection
by David 'Hades' Becker [ Thursday, 18th of April 2019 - 07:00 PM ] 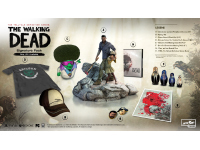 If I can be paid for my prognostication abilities now it would be nice as it looks like we have an announcement for The Walking Dead: The Telltale Definitive Series. This is not a new game under the same name but a new bundle for the franchise that Skybound is placing out there this September for all of the fans. What does it house? Well, the entire story and seasons of The Walking Dead video game that we have enjoyed over the years. Yes, one nice big bundle with all of the episodes and spinoffs that came with it in one little location. Well, one large location based on the special ways that you can pick this bad boy up.

So, not only are we getting one big bundle of The Walking Dead games, but finally a nice big collector's edition of the franchise. On top of getting the entire series in one spot, fans will be able to drop between $99.99 USD to $399.99 USD to get the version of the game that they have played many times over already. Each of which price point coming with different goodies with the biggest being a limited number and housing autographed everything from the team and the guy that created The Walking Dead in general. Also, a nice and big statue to place upon the mantel and other items from the game that have been made in the real world. Kenny's Hat, an Ericson School for Troubled Youth t-shirt, and a Disco Broccoli Plush to name a few things.

Every Collector’s Pack of The Walking Dead: The Telltale Definitive Series will include all four seasons of the game, plus The Walking Dead: Michonne, along with digital bonuses. The Definitive Series includes over 50 hours of gameplay across 23 unique episodes, with graphical enhancements and gameplay improvements, behind-the-scenes bonus features, over 10 hours of developer commentary, a “Return of The Walking Dead” documentary short, faithful recreations of classic menus, a music player that includes more than 40 musical tracks and more.

In addition to game content and digital bonuses, each of the three Collector’s Packs will include special physical bonus items, including: Guardian Pack ($249.99) — Including all items from the Protector Pack in a box with gold stamped signatures from the Still Not Bitten team, plus a 10” Clementine & Lee Diorama, and an 18”x24” Art Print from comic book artist Eric Zawadzki. Signature Pack ($349.99) — Including all items from both Guardian and Protector Packs in a signature stamped box, plus a signed Art Print from members of the Still Not Bitten team, voiceover actors, and The Walking Dead creator Robert Kirkman. Only 100 available!

Is this the bundle you have been waiting for when it comes to The Walking Dead or does it feel a little too late for the gamers it is aiming for? Is this more for the physical items from the game than actually getting the games or will you be diving in for the first time with one of these bundles? Does it make sense to have such a high markup for the autographed edition of the bundle or is that just a bit too pricey for most? Let us all know down in the comments. If there is an update for The Walking Dead: The Telltale Definitive Series, we will share it all here. All you need to do is keep checking back in for all of that as we get closer to September.